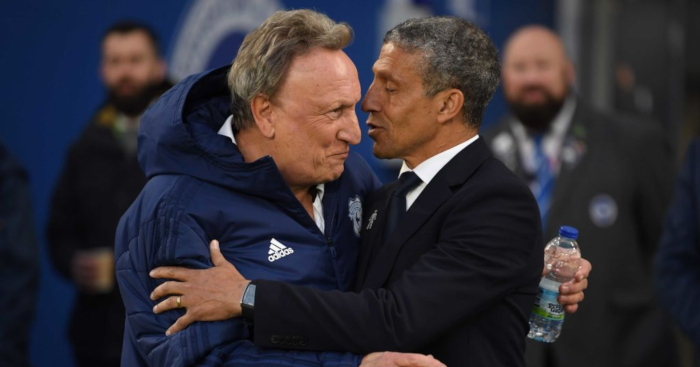 The 18th-placed Bluebirds arrived at the Amex Stadium five points adrift of their opponents and with many bookmakers and pundits writing off their chances of avoiding an immediate return to the Sky Bet Championship.

Goals either side of half-time from Nathaniel Mendez-Laing and Sean Morrison reduced the deficit to two points with four fixtures remaining.

Despite facing title-chasing Liverpool on Sunday and finishing the season at Manchester United, City manager Warnock retains hope of pulling off an unlikely great escape.

“There were so many pundits this morning said it would be our last game in the Premier League. We’re alive and kicking,” said Warnock.

Reckon he’s on about you, Chris Sutton.

“I was proud of the performance,” Warnock continued. “It was disciplined, I think we could have created a few more (chances) but overall I was delighted with all the departments.

“I’ve never lost belief that we can win games. But whether we can get enough points is a different ball game.

“At least now it makes Sunday’s game more important. It’s a great occasion Sunday, full house against one of the best teams in the world, and we aren’t relegated yet.”