Home Cardiff City Warnock: Is it payback time for me over the years? 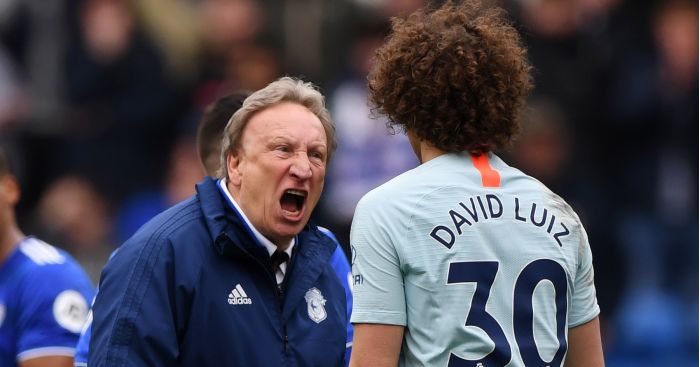 Neil Warnock thinks the Premier League have the “worst officials” in the world after Cardiff lost 2-1 to Chelsea on Sunday afternoon.

Victor Camarasa swept Cardiff ahead with a delicious volley straight after the restart, before Chelsea scored twice in the final six minutes through Cesar Azpilicueta and substitute Ruben Loftus-Cheek.

Azpilicueta’s equaliser, however, was mired in controversy as he looked two yards offside when heading in after Marcos Alonso had flicked on Willian’s corner.

Cardiff were also furious that Antonio Rudiger escaped a red card for dragging down Kenneth Zohore moments later with the striker breaking through on goal.

“It’s difficult because I am really flat. I am so proud of my players,” Warnock told Sky Sports. “To get let down by the officials… roll on VAR.

“We worked three weeks for this but to get let down by decisions… no major decisions went for us.

“They don’t realise what is at stake. If I was a Burnley or a Brighton fan, they will be absolutely loving it today.

“What goes through my mind? Is it payback time for me over the years?

“It’s the best league in the world but the worst officials. They don’t understand what is at stake. They shouldn’t make mistakes at this level.

“Why am I working at 70 years of age for things like that to happen? It’s not very often I am lost for words.

“My players feel like they have been kicked in the teeth. We’ve been kicked so many times. I don’t deserve officials like that today. There is no excuse for that, it’s criminal.

“if my players feel like they look in the dressing room, that’s the end of our season. But how many times have we bounced back this season?”