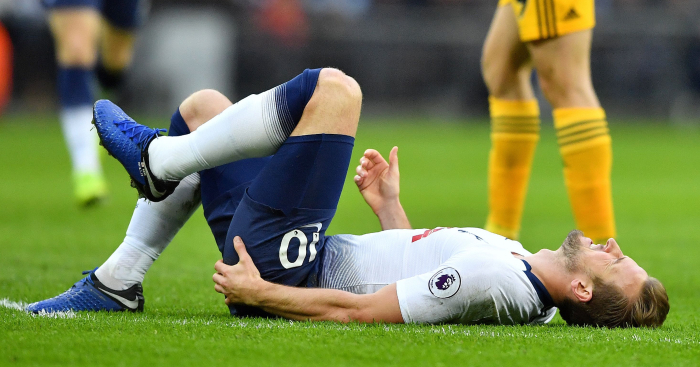 Cardiff host Tottenham on New Year’s Day on the back of England captain Harry Kane being cautioned for a dive during Spurs’ home defeat to Wolves on Saturday.

Asked about the Kane booking at Wembley – which Match of the Day pundit Alan Shearer labelled a correct decision – Warnock said: “It’s so difficult to see diving, you can’t blame referees.

“I say to my players about the top players ‘try not to breathe on them’.

“I said that before the Man United game, ‘if they get in the box don’t breathe on them at all because they’ll be down’.

“That’s how it is nowadays.”

Kane will hope to end an anomaly in his career at Cardiff on Tuesday.

The striker has found the net against 27 of the 28 opponents he has faced in the Premier League on at least one occasion, with Cardiff being the only team he has failed to punish.

There is also further history between Kane and Cardiff.

Kane was accused of getting Joe Ralls sent off in Tottenham’s 1-0 win at Wembley in October, with Warnock saying the striker’s reaction influenced Mike Dean’s decision to dismiss the Cardiff midfielder for a foul on Lucas Moura.

“I didn’t like him confronting Rallsy but I can understand why he did it, he’s looking after his own player in that respect,” Warnock said.

“We hope (his record against Cardiff) will continue, but he’s just a good person.

“He epitomises everything that’s good about English football. Hard-working, clinical, a captain, a leader, a talker.”

Warnock, meanwhile, has confirmed his interest in Dundee midfielder Glen Kamara with the January transfer window about to open.

The 23-year-old Finland international is out of contract at the end of the season, and Warnock believes positive results which have taken Cardiff three points clear of the relegation zone will help his cause to sign new players.

“I have always looked at Scottish football and he is a good player,” Warnock said of Kamara.

“He has had an up and down start to his career, but he is one of a number of Scottish lads we have looked at.

“I’m not confident at all (of signing new players) as it is so difficult in January.

“But it’s better for me when we have had a couple of results that we have had.

“It is easier talking to players when you are not bottom of the league.

“We can try and convince them we have a chance of staying up and ask them to come and help us out.

“It is far better for me to talk to players in that situation. And if you look at the club and the crowds that are following us, it is an appealing place to come to.”