Home Mediawatch Was Kane’s dive not an ’embarrassing piece of cheating’? 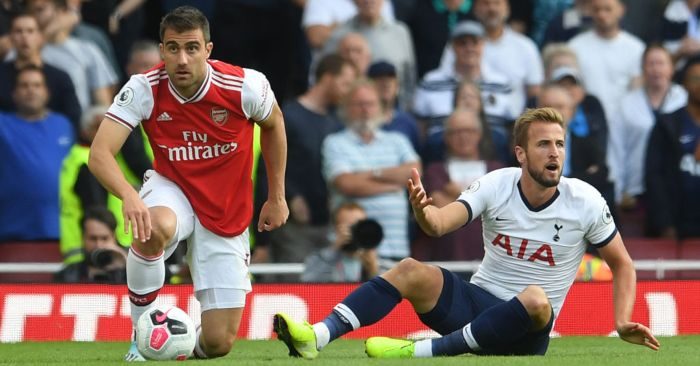 Dive in
‘KANE: I’M NO DIVER’ screams the headline on the back page of the Daily Mirror, despite the striker providing clear evidence to the contrary on Sunday.

‘Harry Kane insisted he is not a diver after being caught up in a penalty storm for the second week running,’ writes Paul Brown.

Jermaine Jenas noted that Kane “needs to be careful”. Ian Wright is too nice to “accuse someone of being a diver”, but did add that “it doesn’t look like he’s trying to stay on his feet there”. Even Neil Ashton in The Sun says ‘it does not look good from any angle’. Kane was clearly a little naughty.

But John Cross barely mentions the incident in the Mirror, dedicating one small paragraph to it:

‘The stadium boiled over in excitement. Arsenal defender Sokratis had an effort ruled out by VAR for offside, while Kane was perhaps lucky not to be booked when he seemed to dive looking for a penalty.’

‘Perhaps lucky’. ‘Seemed to dive’. ‘Looking for a penalty’. The Arsenal fan has made a point of rejecting the chance to stick a boot into the Tottenham player.

Which is made even more curious by Cross’ reaction to Danny Welbeck’s dive to win a penalty for Arsenal in March 2018.

‘What should have been a memorable win over a European superpower was overshadowed by a blatant piece of cheating,’ he wrote then. ‘Let’s not even try to excuse it or dress it up as anything else, the game will be remembered for Danny Welbeck’s blatant dive to win a penalty.’

Welbeck subsequently received a match rating of 0/10 for the dive. ‘Nothing can excuse it, embarrassing,’ Cross added.

Kane’s 7/10 was accompanied with ‘As soon as he steps up, you know he will score from the spot. Brilliant.’

Sure, the two dives were different and Welbeck’s was worse. But they were both the same offence. How can one be ‘perhaps lucky’ and only ‘looking for a penalty’ in a ‘brilliant’ performance, while the other is ‘a blatant piece of cheating’ so ’embarrassing’ that it cannot be excused, having ‘overshadowed’ the match?

We the kings
‘It is still hard to work out who are kings of north London from such a topsy-turvy game…’ – John Cross, Daily Mirror.

That’ll be the Champions League runners-up who have finished higher in each of the last three Premier League seasons.

Kidology
The Daily Mail have a double-page feature asking:

‘KIDS ARE ALRIGHT BUT IS IT TOO MUCH TOO SOON?’

The premise is simple: they have tasked Kieran Gill with figuring out whether Manchester United are placing too much emphasis on their youngsters delivering, with Matt Barlow doing the same from a Chelsea perspective.

Barlow quite rightly points out that ‘against Sheffield United, in fact, the glaring individual errors were made by the visitors and some of Chelsea’s better performances came from their younger players’. Kurt Zouma was the problem, not Fikayo Tomori, while Tammy Abraham scored twice and Mason Mount was again a threat.

But Kieran Gill says United ‘must grow up fast’, comparing Ole Gunnar Solskjaer’s squad to ‘a bunch of kids’ who have been inserted into ‘adult working environments’.

‘In the absence of senior players, Solskjaer has no choice but to turn to his kids,’ Gill writes. ‘Whether they are capable of competing in the Premier League is another matter.’

A reminder that Daniel James, 21, has been by far their best player and top goalscorer. Aaron Wan-Bissaka, 21, has also been excellent. They certainly look ‘capable of competing’.

The kids clearly are alright, and it obviously has not been too much too soon for them. The refusal to sign a central midfielder or alternative forward is a slightly bigger problem than whether 17-year-old Mason Greenwood is ready for his ten minutes as a substitute every weekend.

Athletic build
Rather than playing the kids, United’s problem is more straightforward:

‘MANCHESTER UNITED boss Ole Gunnar Solskjaer is growing increasingly “irritated” with Marcus Rashford and Anthony Martial for their inability to score “scruffy” goals…The Athletic have claimed the Man Utd chief is getting frustrated with his forwards for their lack of killer instinct – shown in the 1-1 draw at Southampton’ – The Sun.

Congratulations, it seems, are in order to The Athletic for their latest scoop. They clearly have some sort of inside information on Solskjaer’s attitude towards his strikers.

Except they don’t. They don’t even pretend to. Adam Crafton writes:

‘For Solskjaer, there are other ways to solve the problem. He is growing increasingly irritated by the failures of Marcus Rashford and Anthony Martial to score “scruffy” goals, the kind he used to relish himself as a player. Rashford has scored in only one of his past 12 games for United and he toiled as a central striker on Saturday.’

But the ‘”scruffy” goals’ line has literally come straight from the mouth of Solskjaer himself.

He said it in February: “You have to read and sniff wherever there is going to be a chance. Maybe some scruffy goals as well at times. We have players like him and Marcus Rashford, they score worldy goals.”

And he said it again at the weekend: “We do create chances, we do create pressure. It’s about those scrappy goals now. We have young players and they’ve got to learn to score those nasty little tap-ins that I did. They count just as much.”

When did literal quotes from a manager become ‘according to reports’.

More than words
The lack of such “scruffy” goals cost Manchester United against Southampton. They had 21 shots, eight on target and a man advantage for 17 minutes, but could only draw 1-1.

Mediawatch would have loved to be a fly on the dressing-room wall in the aftermath of such a disappointing result. How many times did Solskjaer tell his players that we really are Man United? How many things did Harry Maguire headbutt in a furious rage? How many people did Jesse Lingard p*ss off by filming himself dancing for an Instagram video while Mike Phelan forlornly tried to discuss tactics?

‘What happened in the Manchester United dressing room after Southampton draw’

Oh, thank f*** for the Manchester Evening News. They’ll have the inside track. They’ll know exactly what happened.

Please, do go on…

‘Ole Gunnar Solskjaer says ‘words were said’ between Manchester United players in the dressing room after their disappointing Premier League draw with Southampton.’

Crooks of the matter
There’s time for a little Garth, isn’t there?

Here is the entirety of his explanation for naming Jannik Vestergaard in his BBC Sport team of the week. Mediawatch has made no alterations.

‘When Jannik Vestergaard out-jumped Victor Lindelof to nod home a brilliant headed equaliser against Manchester United, my immediate thought was he wouldn’t have done that to Chris Smalling.

‘The former United centre-back, on loan at Roma, finds himself surplus to requirements – along with Romelu Lukaku and Alexis Sanchez – only for United’s manager Ole Gunnar Solskjaer to then have the nerve to say his squad is looking a bit thin. The Red Devils are looking anything other than devilish at the moment. In fact they looked insipid and unconvincing against a 10-man Southampton side who should have been put away.’

If that won’t convince you that Jannik Vestergaard played bloody well, nothing will.

And here’s Garth on Tyrone Mings:

‘Mings, on the other hand, might have been included in the recent England squad but that doesn’t make him an England player.’

It will if and when he plays for England.

Ask a simple question…
‘And when Firmino pounced on a poor pass from Ben Mee to slide Mane in for a cool finish, Jurgen Klopp’s team were certain to go one better than the run of 12 successive victories achieved by Kenny Dalglish’s side in 1990.

‘That was also the year the Reds last won the title, so could that be an omen that this team will end the long wait?’ – David Facey, The Sun.

It was neither ‘fate’ nor ‘destiny’ in April when they were actually recording the majority of those wins last season. It is not an ‘omen’ in September.

Oh, and…
Sod off, Graeme Souness. Your attitude is the problem.

Recommended reading of the day
Jonathan Liew on Tottenham.

Nick Miller on the NLD.