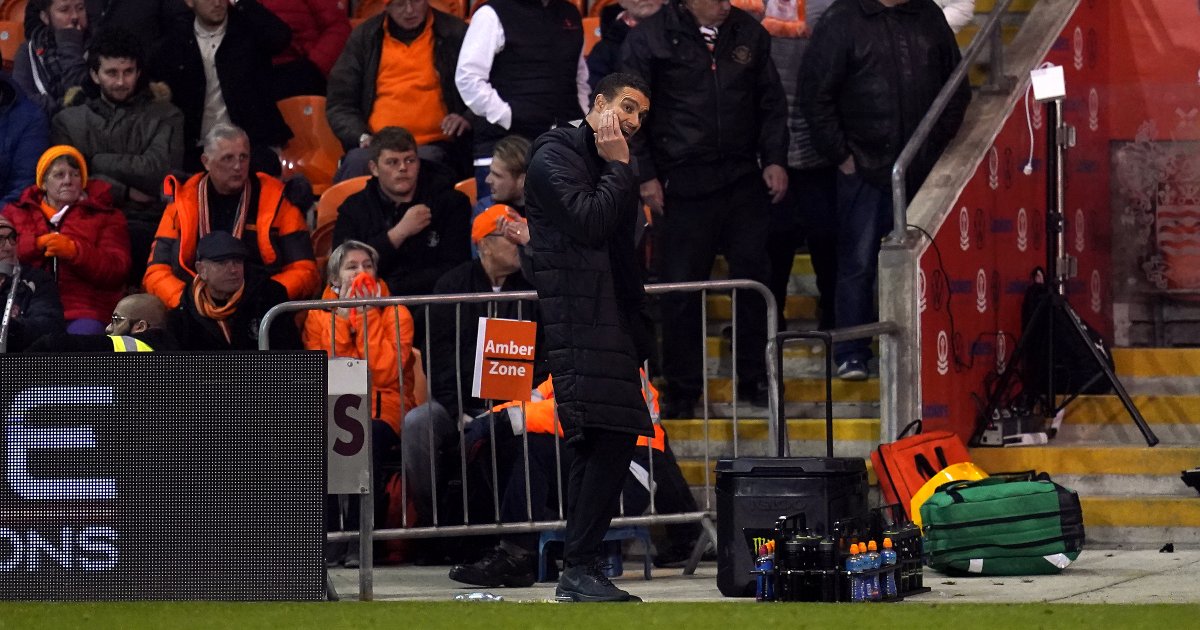 Blackburn and Ben Brereton Diaz top the Championship winners but it’s West Brom who are throwing away a promotion challenge.

Ben Brereton Diaz’ Blackburn
Blackburn began November with a 7-0 hammering at the hands of Fulham, prompting protracted calls for Tony Mowbray’s head from a larger portion of Rovers fans than the average outsider would perhaps expect given the Ewood Park outfit’s start to the season. They have been touted as dark horses for promotion since the opening day of the season, and perhaps thrashing teams as poor as Peterborough speaks as loudly for their Premier League credentials as getting thumped by teams as devastatingly marvellous in attack as Fulham.

But then, a 4-0 win is never to be sniffed at, and coming exactly three weeks after conceding seven makes it even more noteworthy. Peterborough were their own worst enemies, and that is to come, but Blackburn made mincemeat of their lethargic opponents, who looked like they were playing a different sport at times during the first 45 in which the hosts found themselves 3-0 up and on their way to another haul of three points.

Consistently just on the outside very much looking in on the top six this season, Brereton Diaz’s 14th and 15th goals of the campaign are a big factor in making his employers dark horses, but that’s exactly what he is there to do. Right now, he does it better than pretty much everyone.

QPR
With 10 minutes remaining of their contest with Huddersfield Town, it looked as though QPR would fail to score for the first time in a league game since they last faced the Terriers 30 Championship games ago. It was perhaps fitting that Luke Amos was the unlikely man to find the back of the net with his first goal for the Londoners since joining on a permanent deal in the summer.

In a battle between two teams looking to be unlikely promotion contenders, it was the hosts from the capital who punished yet more lax defending late on in an away game from Huddersfield, who are without a win on the road in over two months. The win catapults Rangers into the top six at the expense of Huddersfield. Now it is up to Mark Warburton to help his side find the consistency they have been lacking recently to stay there.

Benik Afobe
Bournemouth came into this game on the back of two defeats in three games, and were left disappointed once more against a Millwall side who are addicted to 1-1 draws – this was the Lions’ third in a row and ninth draw of the campaign.

Benik Afobe has had a horribly tough time on and off the pitch in recent years, and while his struggles with Bournemouth were purely the former, it will have been a fantastic moment for the Millwall striker to find the leveller against his old employers with a precise finish.

Hull City
That is now three wins and three clean sheets in a row for Hull City. Boy wonder Keane Lewis-Potter was the inspiration behind this latest success for the Tigers, who are putting daylight between themselves and the bottom three. Few victories will be this important, leapfrogging defeated opponents Cardiff and putting themselves in the best position of a bottom six very much separated from what is above.

More wins like this and that gap will soon close. Half of Hull’s points collected this season have come in the last three games.

Sheffield United
That’s the way to do it. Barely days after we wondered what was even the point of this Sheffield United and Slavisa Jokanovic marriage, they were given a collective shot in the arm with a hard fought yet well-earned win at lowly Reading on Tuesday night.

With both teams lower in the table than where they would have expected when the season kicked off in August, the Blades at long last showed the cutting edge that has so far escaped them for much of this season, and while the strikers continue to flounder, Jokanovic’s side took a page out of his former club Chelsea’s book, getting wing-back Jayden Bogle forward to score. For the first time in some time, the South Yorkshire side are closer to the top six than the bottom three.

Brice Samba
A plethora of no score draws on Tuesday night made it patently obvious that a change to the usual tack would be required here, with few goalscorers appearing in the winners from the first night of action. Elijah Adebayo could have been the hero, but that mantle was reserved for Nottingham Forest goalkeeper Brice Samba, who has recovered after a wobbly start to the season. In truth, he was far from the only underperformer under Chris Hughton, but he is one of the biggest improvers under the tutelage of Steve Cooper.

A second successive draw against winnable opposition has seen Forest regress to the meme after that initial burst of wins under their new manager, but that is more than good enough for a side craving consistency and steady progress for the first time in too long. Samba’s save immediately after Colback was given a second yellow for conceding the spot kick kept Forest hovering at roughly a point a game mark in recent weeks. That will do.

Derby County
Four points against the undisputed top two in the Championship in the space of four days means the belief is still there for Derby to stay up. They have the full picture ahead of them as to mission: possible ahead of them. A typically robust performance at the back meant a return to the norm for the Rams under Wayne Rooney after the attacking mesmerisation of Sunday shows they are capable of the best of both worlds. There are enough teams above them capable of neither extreme that belief of survival is still alive in the Midlands.

Wasteful West Brom
In the last two games, West Brom have had 45 attempts on goal, five shots on target, and a grand sum of zero goals and one point to show from their collective efforts against Huddersfield Town and Blackpool. That is very nearly shameful, and absolutely unsustainable for a promotion push.

Peterborough United
Travelling to Blackburn was never going to be an easy fixture – unless you’re Fulham – but Peterborough fans would have at least expected some level of fight and quality from their team akin to that of their fellow relegation rivals in recent weeks. By half time, Darren Ferguson’s side were three goals down – two very much of their own making – and a despondent travelling fanbase had next to nothing to cheer from minute one.

Offering next to nothing in front of goal, leaking them for fun at the back, and with very little to be optimistic about in between, Peterborough United have all the ingredients to find themselves entrenched on the wrong side of a relegation battle.

That familiar sinking feeling for Barnsley
How many times have we already been here this season? An in-form Swansea was never going to be the easiest welcome to English football for Poya Asbaghi, but in many ways, it felt like nothing had changed from Markus Schopp’s brief yet miserable Oakwell reign.

With more than half the season remaining, there is plenty of reason to be optimistic – Hull’s recent resurgence shows how one good run of form can carry a side up the table – but there is already an overwhelming sense that there is too much to do for the Tykes this term.

The lowest scorers in the division failed to notch once more while going down to more late goals in the form of a second-half double from Russell Martin’s impressive Swansea side who passed Barnsley almost to death in the first 70 minutes before going for the kill. As has been the case all season, Barnsley have the predatory instincts of a sloth.

Cardiff City’s half-life
One goal was all it took for Hull to defeat Cardiff in the Welsh capital on Wednesday evening, but an even more worrying trend is presenting itself in abominable fashion as we approach winter and the halfway mark of the 2021/22 campaign. The Bluebirds are yet to score in the first half of any second-tier game this season and at the 19th attempt, that is much more a travesty than it is anomaly.

Middlesbrough’s old habits dying hard
That’s five points dropped from winning positions in just two games under Chris Wilder. The smile which greeted the suit-cladded new manager upon taking the job after nearly a year out of the game has soon dissipated after two frustrating and winnable fixtures have been drawn and lost respectively in outings at the Riverside Stadium.

Boro had dropped more points than any of their second-tier counterparts even before Wilder’s tenure began, but that is now 18 for the season. If games finished at half time, Middlesbrough would be sat in third, but another second-half collapse – two goals in the final 15 minutes from a generally uninspired Preston on Tuesday – made for an extremely unsatisfying night for Wilder and his new charges, who are proving that old habits really do die hard.

That Ryan Woods decision
Make no mistake; the decision to give Ryan Woods his marching orders in the second half of a stalemate between Coventry and his Birmingham side was a disgraceful one, by terms of applying the letter of the law to the match. The Blues will count themselves fortunate that it didn’t cost them a point, but it will have hardly quelled Lee Bowyer’s bitterness towards the officiating his team are receiving in recent outings.

However, with the Sky Blues on the break and despite plenty of cover, Woods’ decision to take the man without any attempt whatsoever to play the ball should become a red card offence in the future.