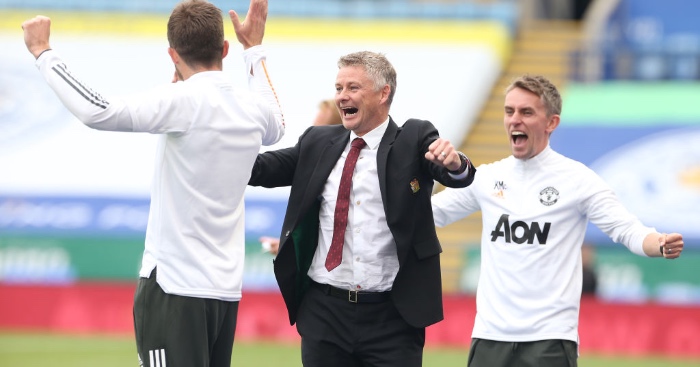 Blonde ambition
You have to feel for Ole Gunnar Solskjaer; he does a steady if not spectacular job of managing Manchester United to their target of third place in the Premier League – though 33 points behind champions Liverpool – and The Sun slap this headline on their back page:

Now, we are sure that Solskjaer would love to win the Premier League title but he is not daft enough to say that after ending the season closer to the relegation zone than the champions in terms of points. But that does not stop Neil Custis:

‘The ambitious Red Devils boss is convinced they can make a run for the title next season.’

Is he though? Or are you setting him up for a massive bloody fall?

So what has Solskjaer actually said? Because we are damned sure it’s not that they can win the title…

“The club know what I feel we need and we will try and pursue it and see where we end up.”

Glory, glory Man United
The headline on the inside pages of The Sun?

‘UNITED BACK ON THE GLORY TRAIL’

All about the DNA
Over in the Daily Mirror, David McDonnell is pouring on the love for Manchester United and Solskjaer.

‘He has revived an ailing club that had lost its way in the wake of Sir Alex Ferguson’s departure.’

Yes indeed. Every revival begins with a league finish 33 points behind the champions. And didn’t they come second in 2018?

‘Where David Moyes, Louis van Gaal and Mourinho failed, albeit with the latter two lifting trophies, Solskjaer has proved his understanding of United’s DNA.

‘And the vision to make the team successful again.’

Yes indeed again. Who needs trophies and points when you can understand DNA?

And presumably it was a different David McDonnell who wrote this in January:

‘A total of £948.23million has been spent on players, with United still no nearer to challenging for the title and in danger of missing out on the Champions League for a fifth time in seven years.

‘They are deficient all over the pitch and need strengthening in so many key areas, it is difficult to know where to begin.

‘Solskjaer talks of the need for time, and it is worth noting it has taken Jurgen Klopp just over five years and eight transfer windows to turn Liverpool into champions-elect.

‘But the structure and recruitment has been wrong at United for so long, it is difficult to see them emerging from their current slump any time soon.

‘While their arch rivals Liverpool and Manchester City have got everything spot on in recent years, United have got pretty much everything wrong, from managerial appointments to player acquisition, and it will take a new approach off the pitch and some considerable time to unpick the damage.’

Or one decent signing, six months and a global pandemic.

Optimism of the day
‘Daniel James will grow into a great player with the club’ – Neil Custis, The Sun.

The Kai, the secret
Ole Gunnar Solskjaer is some kind of genius. Not only are Manchester United ‘back on the glory trail’, but he has ‘already signed Kai Havertz upgrade’, according to the Express.

Now quite how you can sign an ‘upgrade’ to a player you have never owned is unclear, but the basic theme of the piece is that Bruno Fernandes is a superior player to Havertz because he has scored more goals and claimed more assists.

‘Across all competitions, the United star is also statistically superior. A tally of 25 goals and 22 goals is better than Havertz’s 17 goals and nine assists.’

It is but a) Fernandes has scored 12 penalties, b) half his season was spent in an inferior league and c) he is 25 and Havertz is 21.

Apart from all that, they have nailed it; United have basically dodged a bullet.

Crack addict
Elsewhere in The Sun, Chief Sports Writer Dave Kidd is effusive in his praise of Frank Lampard, who has impressed not just with his results but also with the ‘cut of his jib’ in taking on Jurgen Klopp and dropping Kepa for the final game of the season.

But we cannot help thinking that Kidd has missed the point somewhat with this sentence:

‘Before Lampard was appointed as Chelsea boss last summer, it had been virtually unthinkable that an inexperienced English manager could get a crack at a Big Six job.’

Old man. Meet clouds
‘But if ‘assists’ are a genuinely recognised thing, shouldn’t they be judged (by a match delegate) rather than simply being automatically awarded to the player who passed to the goalscorer?’ – Dave Kidd, The Sun.

Just wait until somebody tells him about xG.

Super Cup runneth over
Stan Collymore voted for Jordan Henderson as his Player of the Year. Which is fine. But we really do have to take umbrage at his assertion that he won ‘in the space of 13 months, the four biggest titles in club football’. Frankly, that’s bollocks.

Half chips, half Rice
There’s one small matter not addressed by West Ham fan Martin Samuel in the Daily Mail in which he claims that every team chasing Liverpool should be interested in West Ham’s Declan Rice at whatever price.

He covers the fact that ‘Chelsea, who reached the Champions League, let in as many goals as Brighton, who came 15th’. And he mentions that ‘Manchester United paid £80million for Harry Maguire and £30m for Victor Lindelof and are still far from convincing’, though he fails to mention that United actually conceded only three more goals than champions Liverpool.

And he also somehow neglects to mention that West Ham – with Rice their best defender and best midfielder, apparently – conceded more goals than 15 other Premier League clubs this season.

Adam Smith on the trends of the Premier League season