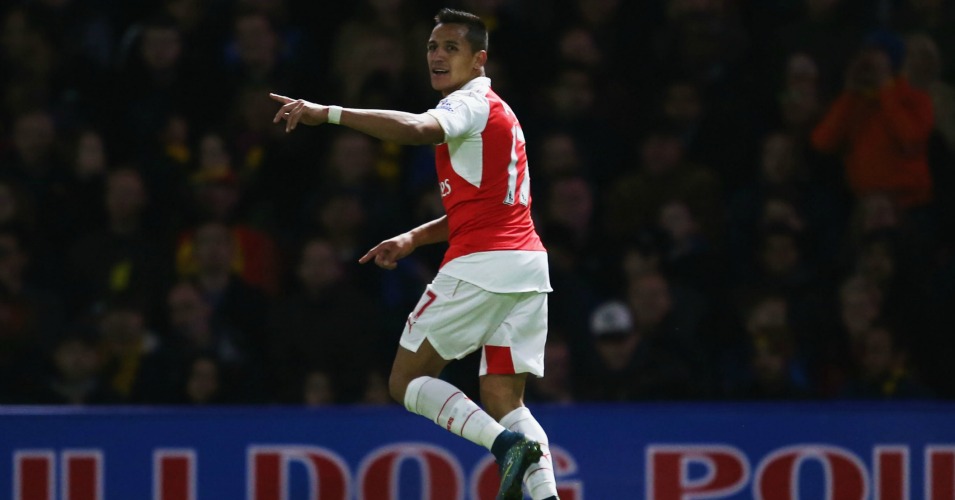 Alexis Sanchez scored his 10th goal in his last six appearances to help Arsenal overcome Watford to secure a 3-0 victory in the Premier League.

Watford were more than worthy opponents for the Gunners and could have taken the lead themselves through Odion Ighalo in the first half, but three points for the visitors looks a fair result upon reflection.

Arsenal faced a stern test in the face of promoted Watford, with the two sides sharing the joint-meanest Premier League defence this season, alongside Spurs, having conceded just seven goals in eight games before this clash.

The Gunners had the first chance of the game fall at the feet – or rather the head – of starting striker Theo Walcott, whose glancing effort from an Aaron Ramsey cross was well saved by Heurelho Gomes after five minutes.

Five minutes later, the two sides shared an effort apiece. First was Sanchez, who tested Gomes with a stinging effort from range, before Watford striker Troy Deeney forced a good save from Petr Cech with a long-range strike of his own.

Whereas the Gunners found themselves 3-0 up within 20 minutes against Manchester United last time out, their opponents on Saturday gradually grew into the game and had two quickfire opportunities to open the scoring.

Ighalo and Deeney were at the forefront of proceedings once more, with the former pulling the ball back for Ikechi Anya before Hector Bellerin’s vital intervention on 17 minutes. Deeney then led a breakaway with Ighalo in a two vs. one situation against Laurent Koscielny, but the Frenchman managed to intercept the pass and spare Arsenal’s blushes.

Ighalo then had a gilt-edged chance to break the deadlock on the half-hour mark, but inexplicably managed to stab wide when one-on-one with Cech.

Watford went into the break with their record of not conceding a first-half goal at Vicarage Road this season intact, and they looked like they were headed for another clean sheet before Sanchez intervened just after an hour had gone.

A closely-fought second half was finally brought to a close as Sanchez swept home following excellent work from Santi Cazorla and Mesut Ozil, and Arsenal stamped their authority on proceedings after that.

Giroud, who had only been on the pitch for two minutes, then doubled Arsenal’s lead with a well-taken finish from Ozil’s cutback on 68 minutes, while Ramsey finally scored his first Premier League goal of the season after diverting Bellerin’s cross beyond Gomes seven minutes later.