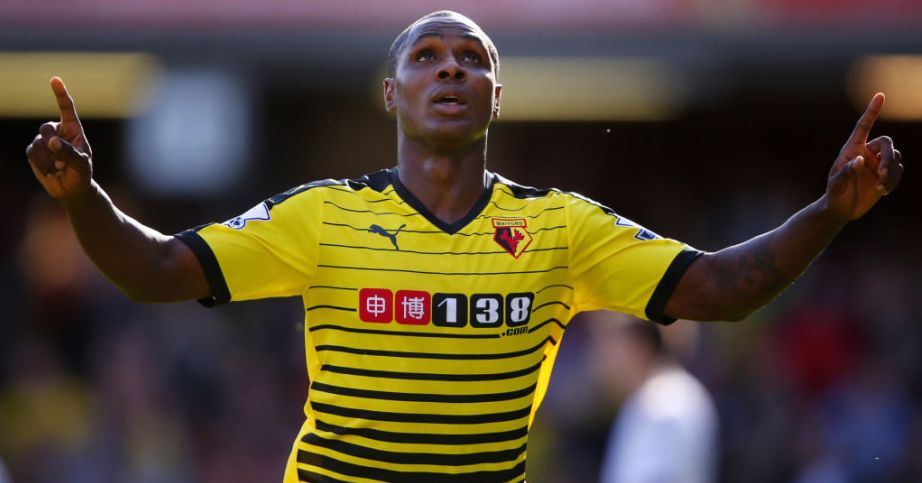 Odion Ighalo celebrated signing a new Watford contract in style by firing them to their first win of the season – a 1-0 victory over Swansea.

Ighalo, who committed his future to the newly-promoted side by agreeing a five-year contract on Friday, calmly converted from six yards in the second half to secure Watford’s first league win of the season.

Valon Behrami was sent off for a reckless stamp on Andre Ayew after 64 minutes, but a below-par Swansea never threatened to equalise and the Hornets held on for a much-needed victory.

Victor Ibarbo, who arrived on a season-long loan from Roma on deadline day, received international clearance and was named on the Watford bench by Quique Sanchez Flores. Swansea manager Garry Monk fielded his strongest side with Jonjo Shelvey, fresh from his England call-up, marshalling the midfield, and Wayne Routledge preferred to Jefferson Montero.

The first real chance of the match fell to the hosts with 10 minutes gone when Ikechi Anya’s cross from the left landed at the feet of Sebastian Prodl. But, from the edge of the Swansea area, his half-volley went narrowly over the bar.

Eight minutes later and Watford were on the attack again. This time Almen Abdi took aim at goal, but his effort clipped off the heels of Neil Taylor and went out for a corner. Incredibly the Hornets were still awaiting their first shot on target in over two games.

And it was in fact the visitors who would be the first to bring a goalkeeper into action. Bafetimbi Gomis, scorer of nine goals in his last 10 Premier League outings, turned and shot from the edge of the penalty area to bring a fine save from Heurelho Gomes in the Watford goal.

Ikechi Anya was then caught dallying on the ball near his own corner flag. Ayew stole possession and he found Gomis, who had fallen to the floor, but his improvised effort went straight into the hands of a thankful Gomes.

And then with the interval approaching, it came, Watford’s first shot on target in nearly two and a half matches. Ighalo wriggled in from the left-hand side, but his effort was saved by the feet of Lukas Fabianski. The half-time whistle at a sun-drenched Vicarage Road blew and the score was goalless.

With the hour mark approaching a largely tepid affair then suddenly burst into life. Ighalo drove into the penalty box but his effort was wide of Fabianski’s goal.

Moments later came the breakthrough and with it a little bit of history.

A long punt down field from Gomes was headed down by Troy Deeney and, unmarked, six yards out, Ighalo calmly sidefooted past Fabianski. It was the least the hosts deserved and Vicarage Road erupted.

But with the Watford fans still celebrating their first home goal in the Premier League this season, they were stunned into silence as Behrami was shown a straight red card for a stamp on Ayew above the knee.

With the extra man Swansea would have been expected to up the ante, but Monk’s side barely called Gomes into action and it was Watford who had the best of the remaining chances with Fabianski forced into a late double save in the closing stages.