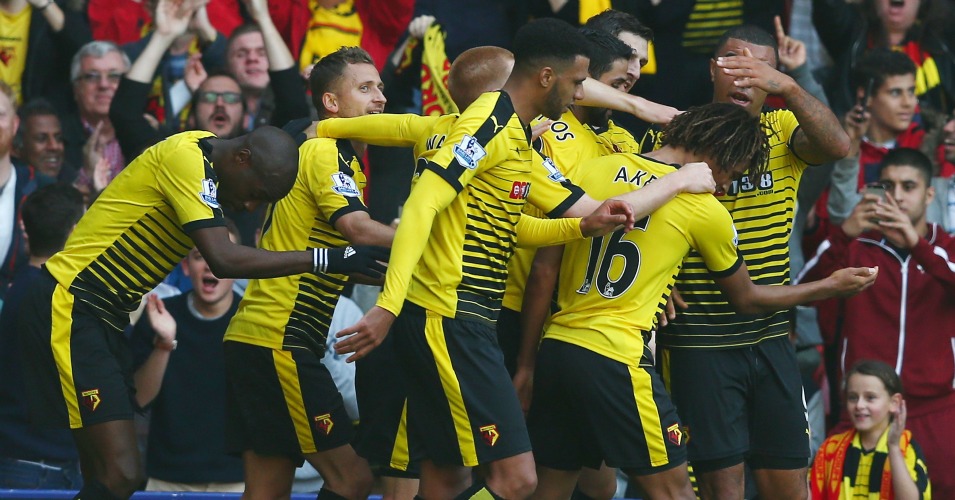 High-flying West Ham crashed back to earth with a bump as Odion Ighalo inspired Watford to a 2-0 win at Vicarage Road.

Slaven Bilic’s side may have beaten Arsenal, Liverpool and Manchester City on the road this season, but they came a cropper against the Hornets.

Ighalo claimed he had opened the scoring in the 38th minute by converting Nathan Ake’s cross, but Hammers defender Aaron Cresswell had actually turned the ball into his own net.

But their was no doubting the scorer when Ighalo doubled their lead just after the interval with a clinical strike.

West Ham, meanwhile, had James Collins sent off as their unbeaten record away from home came to a sorry end.

But unfortunately for them, the big frontman was more involved in his own penalty area than the opposition’s – with some calamitous results.

After just 10 minutes Watford were claiming a spot-kick after Ake’s header was kept out by keeper Adrian and the ball fell to Ighalo.

The Nigerian’s shot was heading for the back of the net until it hit the head, and then the outstretched arm, of Carroll, but referee Keith Stroud ignored Watford’s penalty appeals.

Miguel Britos then headed Ben Watson’s corner wide before Stroud waved away more cries for handball, this time against Collins on the edge of the area.

Watford’s pressure told the the 38th minute when they opened the scoring courtesy of Carroll’s mistake.

Carroll was West Ham’s hero from the bench against Chelsea last week, but the striker got himself in an almighty mess from Watson’s free-kick.

Instead of clearing the ball he attempted to drag it back past Ake, only for the Hornets defender to leave him red-faced and send in a low cross which was turned in by Cresswell.

Ighalo, who also had a swipe at the ball, ran off celebrating what he claimed was his goal – but he did not have to wait long for his sixth of the season, He collected Ikechi Anya’s square ball and shifted it to one side before crashing an unstoppable drive into the top corner from 15 yards.

West Ham huffed and puffed as they attempted to get back into the game, but the closest they came to pulling one back was when Enner Valencia latched onto Craig Cathcart’s wayward backpass only to see his shot come back off the post.

Their misery was complete when, with four minutes to go Collins, clattered into the back of Ighalo on the halfway line and was shown a straight red card.