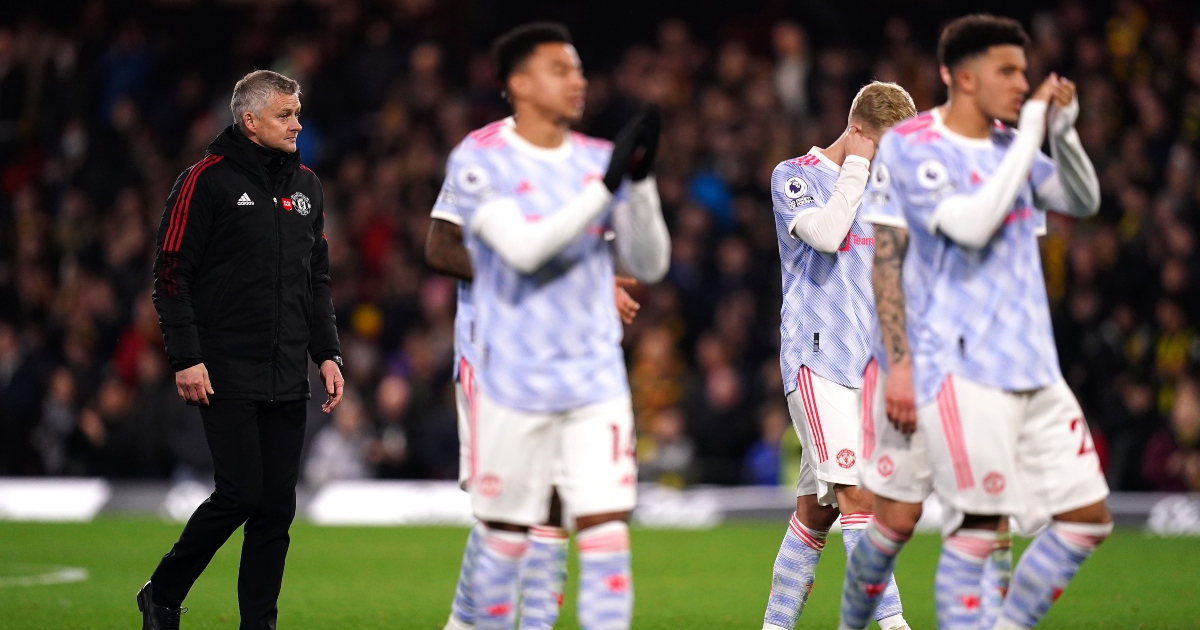 United travelled to Vicarage Road having lost four of their last six Premier League games before the international break and this heavy defeat only piled more misery on the beleaguered Norwegian.

The Hornets could have taken a sixth-minute lead but Ismaila Sarr, who had to retake his first penalty after Kiko Femenia was ruled by VAR to be in the box, had his second spot-kick saved by David De Gea.

But Joshua King tapped home to give the home side a deserved lead in the 28th minute before Sarr followed up with a low drive of his own just before half time.

Despite substitute Donny van de Beek pulling one back with a header in the 50th minute, United were unable to find go the equaliser, with Joao Pedro and Emmanuel Dennis adding to the home side’s tally in stoppage time.

It was a poor performance from United, which was compounded when Harry Maguire was shown a red card with 21 minutes remaining.

The defender had come under criticism for his part in goals conceded in the 4-2 defeat at Leicester, the 5-0 home thrashing by Liverpool and the 2-0 loss to Manchester City in recent weeks despite impressing for England.

Watford had an ideal chance to take the lead in the sixth minute when referee Jonathan Moss pointed to the spot after Scott McTominay bundled King over in the box with a clumsy challenge.

Sarr, who scored a lucky goal last time Watford beat Manchester United at Vicarage Road in 2019, stepped up to take the penalty. His effort was saved but Femenia followed up to fire in the rebound.

However, VAR ordered the penalty be retaken after ruling Femenia was in the area when the first kick was taken.

Sarr stepped up to take the second one and De Gea dived low to make a second save, only this time the United players were able to get back and kick the ball out for a corner to keep the score goalless.

Just before the half-hour mark, the Hornets took a deserved lead after dominating possession for the majority of the opening period.

King, who had almost given his side the lead before being brought down by McTominay for the penalty, tapped home a cross from Dennis to give the home side the advantage.

Moments before half-time, Sarr made up for his earlier penalty misses to double his side’s lead, the 23-year-old scoring his fifth goal of the season with a low drive from the edge of the box past De Gea.

At the beginning of the second half, United pull one back when half-time substitute van de Beek, who has yet to start in the league this season, headed the ball past Ben Foster.

A cross from the right was headed back across goal by Cristiano Ronaldo, with van de Beek diving at the far post to head home.

Ronaldo was played through in the 58th minute with a chance to level but Foster came off his line to make a good save to deny the forward.

The visitors’ challenge to find the equaliser was made tougher when Maguire was sent off for a scissor-like challenge on Tom Cleverley.

Substitute Pedro secured all three points for the Hornets, the Brazilian being found by Dennis before firing through De Gea’s legs in added time.

The provider then turned goalscorer for Watford’s fourth, capitalising on a long punt from Foster to complete a miserable day for United.