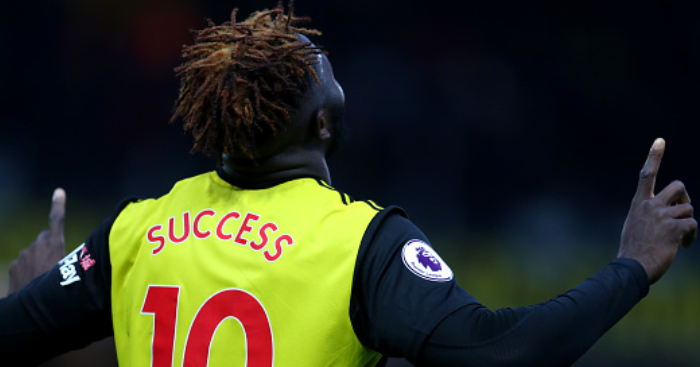 Watford head coach Javi Gracia has condemned the behaviour of Isaac Success following a stoppage-time altercation with a ball boy in Wednesday’s defeat against Tottenham.

The Hornets striker punched the ball out of the grip of the ball boy as he looked to waste time for the home side, who secured a late 2-1 victory courtesy of a Fernando Llorente header.

Success was shown a yellow card by referee Graham Scott following the incident, with the ball boy then winking to the crowd – seemingly celebrating his part in running down the clock.

Gracia was asked about the issue after the game but had not seen the footage, although speaking on Thursday morning the Spaniard was not impressed with Success’ actions.

“I think we have to look after the boys always and it is not a good reaction is what I can say.

“I am not here to educate the ball boys on what have to do or what they don’t have to do. It is not my job. What I can say is we need to improve our behaviour next time.”

Next up for Watford is a trip to face Brighton, with Abdoulaye Doucoure’s involvement still up in the air due to a knee injury.

The former France Under-21 international midfielder has been linked with a move to Paris St Germain for much of the January transfer window.

Chelsea emerged as a side showing a reported late interest in signing Doucoure but – as he has done for much of the month – Gracia treated the latest speculation with short shrift.

“It is new because it is another club, but it is the same news as the last days and weeks,” Gracia added.

“I don’t know anything new about that. In this moment I am concerned about Doucoure’s evolution because I want him to recover as soon as possible, because he is an important player for us.

“I think he will be ready soon, but in this moment I don’t know when he will be available.”