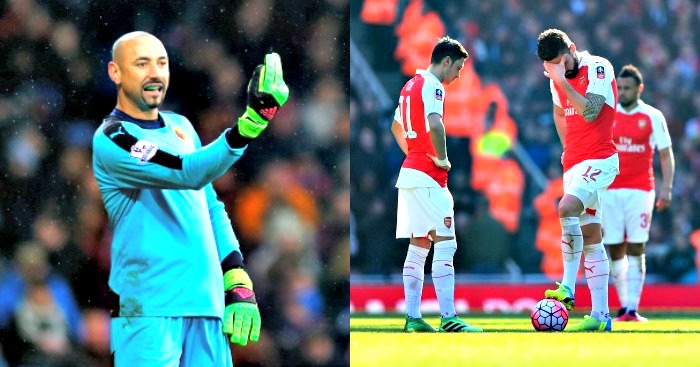 Heurelho Gomes has branded Arsenal a “small team” after Watford beat them in the FA Cup quarter-final.

Goals from Odion Ighalo and Adlene Guedioura inspired Watford to a 2-1 victory over the Gunners at the Emirates Stadium on Sunday.

With Arsene Wenger’s side third in the Premier League and eight points behind leaders Leicester, a once promising title challenge has predictably faltered.

In the Champions League, Barcelona hold a 2-0 lead over the Gunners from the first leg of their last-16 tie, with the second leg still to come at the Nou Camp.

And so the FA Cup provided what looks to be a final chance of salvaging silverware from this campaign. Another sorry season ended on Sunday.

Speaking after the game, Gomes explained the confidence with which Watford approached the game, due to Arsenal’s many deficiencies.

“It is the best time to play Arsenal and we came to the match very confident,” Gomes told ESPN Brasil.

“When you see Arsenal playing against big teams, they look like a small team. They don’t look like winning a title soon.”

“We knew once we had the ball we’d be able to pass it around since Arsenal gives you too much space. They are not strong defensively.”