Sarr will remain at Vicarage Road until at least January after Watford rejected the latest offer for him. 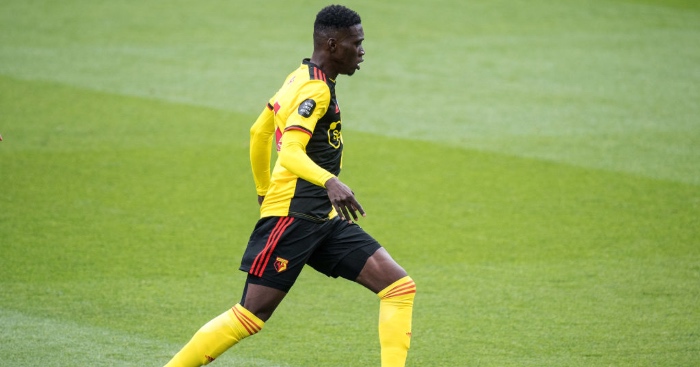 Championship side Watford rejected a £25 million offer from Crystal Palace for winger Ismaila Sarr just hours before the transfer window shut today, according to reports.

The window shut at 17:00 after a relatively quiet day for clubs in England. The main talking point was Joe Rodon’s move to Spurs from Swansea City for a reported £15 million fee.

One deal that would have been interesting to see is Sarr to Crystal Palace, especially after plenty of interest from reigning Premier League champions Liverpool.

According to Sky Sports, Watford rejected the offer as Palace did not match their valuation of the 22-year-old.

Sarr burst onto the scene last season as Watford beat Liverpool 3-0, handing them their first loss of the campaign. He scored two and assisted the other goal as the Hornets ran riot at Vicarage Road.

Following the victory, Liverpool were reportedly interested in signing the player who had played such a big part in beating them.

Talks concentrated around a potential £40 million deal for the player, although this never materialised.

Palace attempted to sign the player themselves this afternoon but did not succeed. Watford see Sarr as one of their most valuable assets and wanted to hold out for more money.

The Senegalese international will instead help Watford in their pursuit of promotion from the Championship. They play Derby County tonight away from home.

Meanwhile, Palace have had a fairly quiet transfer window after bringing in just three players. Arguably their most important piece of business is the £20 million signing of youngster Eberechi Eze from QPR.

Roy Hodgson’s men started the season brightly with important wins over Southampton and Man Utd. However, their most recent Premier League match was a 4-0 defeat at the hands of Frank Lampard’s Chelsea.

They’ll be looking to bounce back from that loss when they play Brighton this weekend. The fixture is set for 14:00 on Sunday, with Palace playing at home.