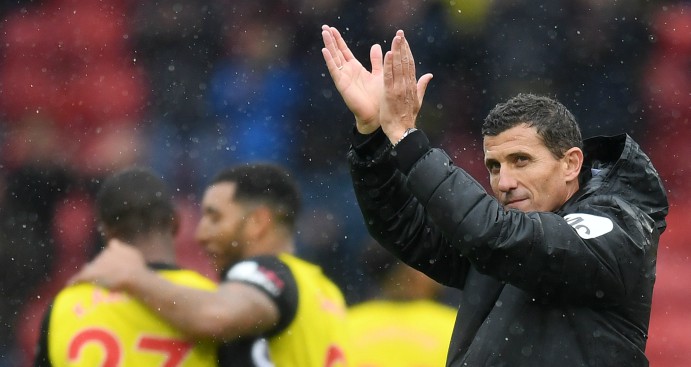 Javi Gracia insists his Watford side remain mentally strong after their perfect start to the new Premier League campaign came to an end.

The Hornets will look to get back to winning ways quickly at Fulham in Saturday’s televised lunchtime kick-off after seeing Manchester United inflict a first defeat on them last weekend.

Gracia’s well-drilled squad are only three points behind leaders Chelsea and Liverpool, so the Spaniard sees no reason not to remain positive.

“We had a good performance last week regardless of the result. We played well – we didn’t get a good result, but I’m pleased with the performance,” the Watford manager said.

“After four wins in a row, the team is mentally strong. They don’t need to get a good result to know we are doing good performances.

“Now in this moment, we are confident of keeping our level. We try to get better results knowing it will not be easy. We are training really well.

“Mentally, the team is strong and has the confidence it needs to take the result.”

Fulham were beaten 3-0 at Manchester City last time out, a third Premier League defeat on their return to the top flight.

Gracia is not expecting an easy afternoon by the Thames as Jokanovic prepares to tackle his former club.

“Fulham are playing really well, so I know it will be a tough game, but we are going to compete,” Gracia said at a press conference.

“They are a team who like possession, have an average of 54 or 55 per cent, and with a style of play where they are organised.

“We have to be ready to defend well when we don’t have possession, but we will see what happens.

“We try to keep our style of play, our mentality and to be aggressive.”

But Gracia warned his team not to focus only on the threat of the Serbian frontman.

“Mitrovic is scoring the goals, but for me Fulham is not just Mitrovic,” the Watford manager said at a press conference. “There are many good players around him that help him to do his work.

“We have analysed Fulham this week and we try to do our best.”

Johnny Nic on rugby: the Will Spencer debate (Planet Rugby)