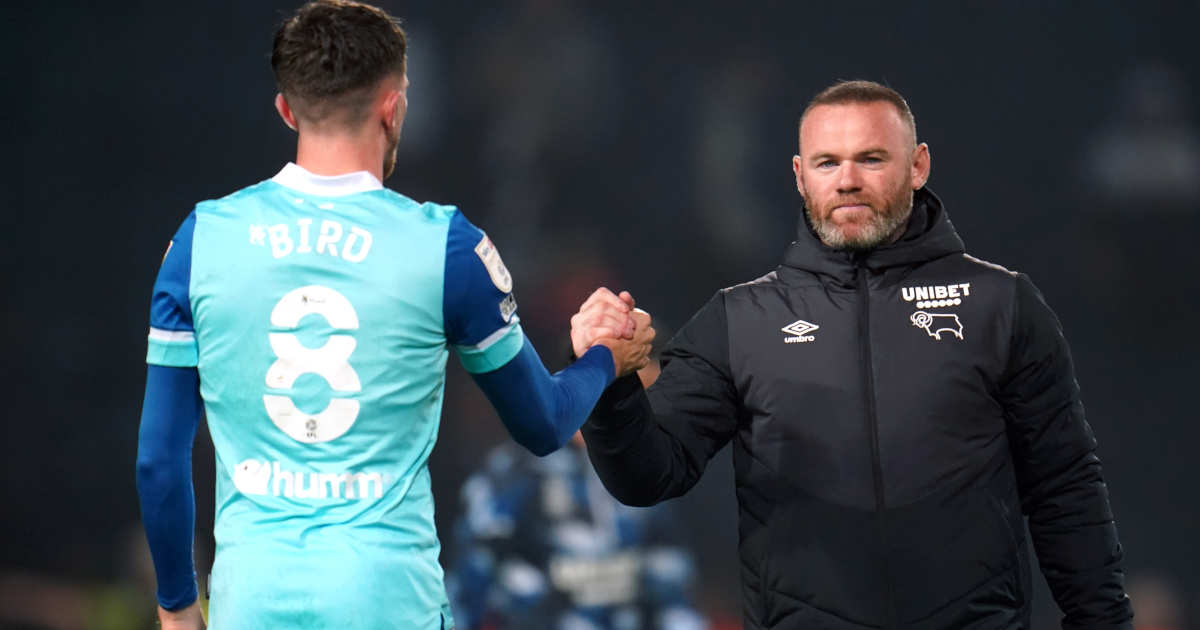 When the full-time whistle blew at The Hawthorns, Wayne Rooney had reason to feel quietly content with his evening’s work. West Bromwich Albion, relatively financially plump thanks to Premier League parachute payments while the rest of the Championship continues to fire-fight the long-term effects of the Covid pandemic, are among the favourites to win this division. Snatching a point from this match would be a noteworthy achievement for any Championship club this season. For the shambolic Derby County, it was most unexpected.

The issues that have been hanging over Derby since before Rooney assumed the managerial seat at Pride Park may now be reaching their endgame. The club was fined £100,000 and accepted a suspended six-point deduction in the summer over a failure to pay their players on time last season, but this suspended sanction now seems likely to be superceded in the near future. It is reported that the EFL and Derby have now reached an agreement over a 12-point deduction with three suspended. This concerns the club’s policies regarding the amortisation of players’ contracts in their company accounts, with the three suspended points covering any potential further breaches in accounts which have yet be submitted.

No agreement seems have been reached over the EFL’s requirement for Derby to agree a business plan with them, but the tone of reporting suggests that the end is finally nigh for this lengthy and dismal saga. Owner Mel Morris has previously pushed back against all of this. Such a points deduction would drop Derby to the bottom of the Championship table, making relegation to League One considerably more likely, while also potentially disincentivising possible new buyers from getting involved with the club.

That said, the current uncertainty doesn’t seem to be attracting buyers either. If the nine-point deduction is applied now, Derby would be on minus two points, six from safety. That’s only two wins, and at least everybody would know where they stand right now. Derby would be a more enticing prospect as a club that has just survived in the Championship, and two or three wins would push them into that bracket. And Derby County really do desperately need a clean sweep.

The sanctions don’t only come in the form of points deductions and fines, either. Derby are under a transfer embargo which had to be softened in July after the club appealed on the grounds that they would be unable to meet the requirement to have 23 players of ‘professional standing’ for the new season.

Their squad now consists of exactly 23 players, and it’s fair to say that it qualifies as ‘threadbare’ (they have eight players in their squad aged 20 or younger and eight aged 30 or over, while two are long-term injured), and they remain odds-on favourites to be relegated from the Championship come the end of this season. But with seven games of this season played, Derby are in 16th place in the Championship. They’ve only won one game, but they’ve only lost two and they’ve held two of the top six – West Bromwich Albion and Huddersfield Town – to a draw.

None of this means that Derby have been setting the Championship alight this season. Far from it. There is a certain irony to the fact that a team coached by England’s record goalscorer should have found its biggest problem on the pitch this season to be scoring goals, but Derby have only managed four in their first seven matches and this is a record that will have to improve, if they’re not going to start sliding towards the relegation places regardless of any points deductions.

Their goalscoring cause wasn’t exactly helped when Colin Kazim-Richards was taken off on a stretcher during their second match of the season at Peterborough with Achilles tendon damage, either. He was expected to be out for 12 weeks, and there is still no confirmation of when he will be back in the first team. Another player listed in their squad, defensive midfielder Krystian Bielik, suffered an anterior cruciate ligament injury in his right knee for the second time in just over a year at the start of February. There’s still no date for his return, either.

This focus on defence is understandable, all things considered. For teams with limited resources, it makes perfect sense to focus on tightening the defence, and goalkeeper Kelle Roos has kept three clean sheets already this season, giving him the best Save Success Rate in the division. If they can sort out their goalscoring issues, then even with the big points deduction there is plenty of capacity for them to survive. The Championship is a 46-game slog, as Derby County – the division’s joint-longest inmates – should know better than anybody else.

When Wayne Rooney was appointed as manager of Derby County, few would have expected him to find himself in the position he is now. Rooney was appointed as a show of strength, and widely viewed as a celebrity manager, there because of the draw of the name (and, some said, a sponsor paying a proportion of his wages) rather than anything to do with his managerial abilities. But when he became the manager of Derby County in November 2020, they were in 24th place in the EFL Championship. By the end of the season, albeit by the skin of their teeth and off the back of an atrocious run-in, they finished above the relegation places.

This tumultuous summer, and in particular the transfer embargo, has left Wayne Rooney operating with one hand tied behind his back. His squad had to be brought together at just a few weeks’ notice, and by most rational analysis his team should be failing. But they haven’t really, not so far. They’ve scored the joint least goals in the division, but they’ve conceded less than one goal per game and they’ve only been beaten twice in seven league matches. Derby County may very soon be heading for the bottom of the table, but ultimately it’s Mel Morris who needs to be answering questions about that, rather than Wayne Rooney.