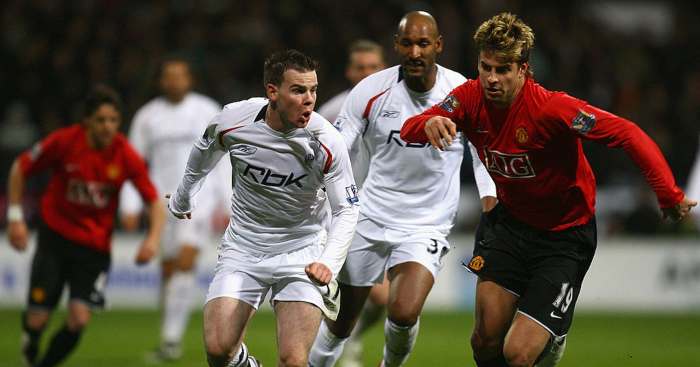 Pique joined Man Utd from Barcelona’s academy in 2004 but was eventually sold back to the Catalan giants for just £5m in 2008, where he has since gone on to win eight La Liga titles and three Champions Leagues.

The Spaniard had tough competition at Man Utd with Rio Ferdinand and Nemanja Vidic forming one of the best defensive partnerships the Premier League has ever seen.

But Rooney recalls an away trip to play Bolton in 2007 where Pique really struggled, leaving Sir Alex Ferguson convinced that he couldn’t cut it in the English game.

“Bolton away more or less finished Gerard Pique’s career at United,” Rooney wrote in the Sunday Times. “He was young and got bullied there and I think that’s when Fergie decided that, physically, he wasn’t right for the Premier League.

“I always remember Vidic: if we were going to Bolton — and it was the same when he was about to face Didier Drogba — he would be in the gym for two or three days before, pumping himself up.”

Rooney added: “Bolton away was always horrible. It was physical and you knew you had to win the fight to win the game. I remember Evra saying about Kevin Davies: ‘I hate this person.’

“On throw-ins Kevin would go and pin the full back with his elbows all over their face and in challenges when the ball went down the line he would leave his foot in.

“Bolton had bits of quality too and the way they fought and worked as a unit, then found moments to use that quality, was typical of how a team can beat better players by being more than the sum of its parts. It happened for Everton in the 1995 FA Cup final — I still don’t know how we beat United that day.

“It happened when United played Barcelona in the 2008 Champions League semi-final. Barca played the better football by a mile in both legs and that was 180 minutes of pure hard work, of hanging in there, and riding your luck. Real teams realise that sometimes you have to win ugly.”