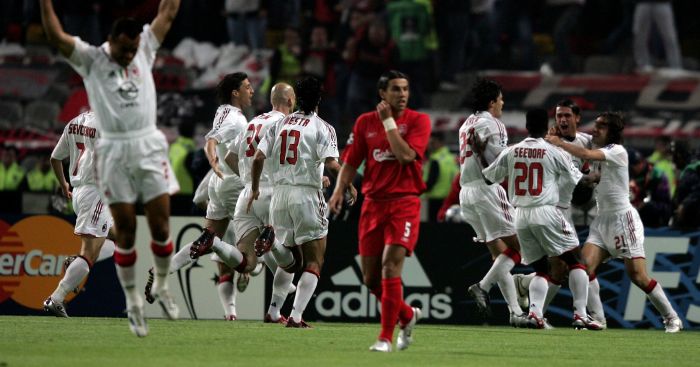 Paolo Maldini thinks AC Milan’s 2005 Champions League final defeat to Liverpool on penalties was “cruel” after the Italian side “dominated the game”.

The Reds came from 3-0 down at half-time to draw level by the hour mark thanks to Steven Gerrard’s header, a long-range strike from Vladimir Smicer and Xabi Alonso’s rebound goal from his missed penalty.

Jerzy Dudek was brilliant in extra time and the penalty shootout as Rafa Benitez’s side won a historic fifth Champions League title on spot-kicks.

“Yes I think I watch the Istanbul game again for the first time after a year,” Maldini, who scored Milan’s opener, told Goal and DAZN. “It was then I realise how well we had actually played.

“We dominated the game for about 110 minutes out of 120 total. But football is that type of sport and sometimes it’s cruel.

“It reminds me of how strange and peculiar football can be.”

Maldini admits he almost missed the opportunity to put Istanbul behind him when the sides met again in the Athens final in 2007, which Milan won 2-1.

“Let’s say that playing in that [Athens] final was a bit of a gamble,” Maldini added. “But as I knew it would be my last chance to play in a Champions League final, I did everything I could to be there.

“That’s why, after two days spent celebrating, I went to Belgium to have knee surgery.

“I think the strength of that group was being able to reach the final again in a 2007 season that wasn’t especially great.

“Once we got there we had everything to lose really, because if we lost again to Liverpool then it would be something very difficult to erase.”