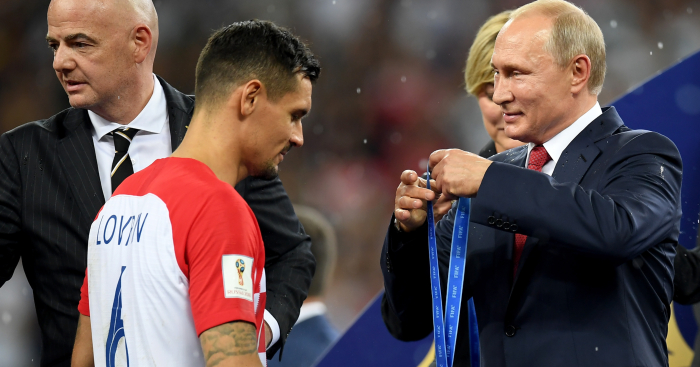 Zlatko Dalic’s side started superbly and looked the brighter team for large chunks of the match, only for France to ride their luck and eventually emerge victorious.

Liverpool defender Lovren was gutted to have lost the final and criticised the approach taken by Didier Deschamps’ team – just as defeated semi-finalists Belgium did.

“France didn’t play football. They waited for their chance and they scored.

“They had their one tactic and you have to respect it. They played every game of the tournament like that.”

Lovren’s assessment of the officiating was just as cutting as his comments about France.

The free-kick that brought the opening goal was a contentious award, and it got worse from a Croatian perspective when the video assistant referee intervened and encouraged the on-field official, Nestor Pitana of Argentina, to take another look at a possible handball in the area by Ivan Perisic.

Pitana gave the penalty after minutes of deliberation in front of the monitor to leave Croatia infuriated, with Lovren describing it as a “critical moment”.

“I’m disappointed because we lost the game but played much better football than them,” Lovren said.

“I am proud of what we achieved, second in the world. I’m proud of everyone and for the country. We have regrets now when we look at decisions but it doesn’t make sense anymore.

“It’s hard to describe. Maybe after a couple of months I will have everything straight. It’s hard now as I am some moments sad and some moments happy. Overall I am proud.

“We played beautiful football and when we didn’t have the ball we stayed compact. But they had their chances and they scored.

“France have been one of the favourites to win the World Cup and they did. But nobody understands the rules.

“Our guy couldn’t possibly react so why did he (Pitana) give it?”

Asked if VAR needs work, Lovren said: “Definitely. Of course it needs to improve. Sometimes it is a penalty and sometimes not. I really don’t understand. So everything is still on the ref. A lot of people say it’s not a penalty but what can we do now?”

This could be the best it gets for this star-studded generation of Croatian players.

Lovren, Ivan Rakitic and Perisic will all be well into their 30s when the next World Cup comes around, as will Golden Ball winner Luka Modric.

“I wish we were all 24 still, especially Luka,” Lovren said.

“There is a time when something needs to end and it will depend on individual players.

“I still think I can give enough, I feel young for a defender.

“For the rest, I wish Luka could still play. He showed today he deserves to be the number one of the tournament and in the world. I am really proud of him.

“At least now he can be a contender (to win FIFA’s player of the year award). I don’t see why he wouldn’t be in the top three at least. He took the best player of this tournament so if he is not now in the best three in the world then I don’t know what to say.”