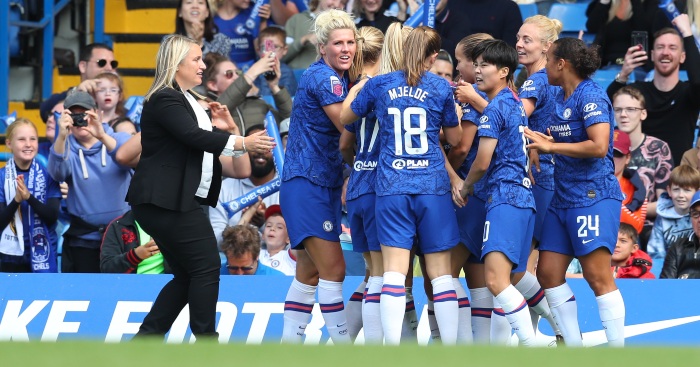 Chelsea Women manager Emma Hayes said the club have “won a lot” for the game beyond the three points with her side’s 1-0 win over Tottenham in front of nearly 25,000 spectators at Stamford Bridge.

Bethany England’s stunning fourth-minute strike sealed victory for Chelsea in a match they dominated for long periods, in their first game of the season in the Women’s Super League.

Spurs goalkeeper Becky Spencer kept her side in the game in the first half, making two good saves to deny Hannah Blundell and Guro Reiten.

The attendance figure of 24,564 did not break the 31,213 at the Etihad Stadium for the Manchester derby on Saturday, and supporters had been allowed in to the west London venue for free. But it was still five times more supporters than had ever previously watched a league match for Chelsea Women.

Hayes said: “Just as the game starts and the Chelsea fans make an atmosphere, the Spurs fans start chanting and I thought, ‘happy days’, that’s what we’ve worked towards – an atmosphere, people coming to the game.

She added: “We’ve won a lot today, not just three points, in people’s consciousness, women’s football will continue to grow and I’m so proud of this football club.

“I doubt I’ll ever work at a place that has pushed and pushed for women to progress like this place has.”

Hayes was also full of praise for match-winning goalscorer England, saying: “I think her feet are firmly on the floor, I think the first four minutes of the game, she saw there was a pocket of space because they dropped so low in the game.

“Beth is ready, I think she justifiably earned her England call-up. She’s got charisma, she’s got good hold-up play, she can finish left and right foot, she has personality in the dressing room.”

Tottenham Women manager Karen Hills said she thought the experience of playing in front of such a big crowd was incredible.

The manager of the newly-promoted side said: “I thought we came here to win a football match, first and foremost, obviously the occasion was a momentous one for women’s football, I think this weekend has been absolutely incredible in terms of attendance. Both sets of fans were outstanding.

“But we set our stall out and I thought we’ve come away with a lot of positives. (We’re) obviously disappointed to lose a football match but (I’m) really, really pleased and proud of every single one of those girls in there.”