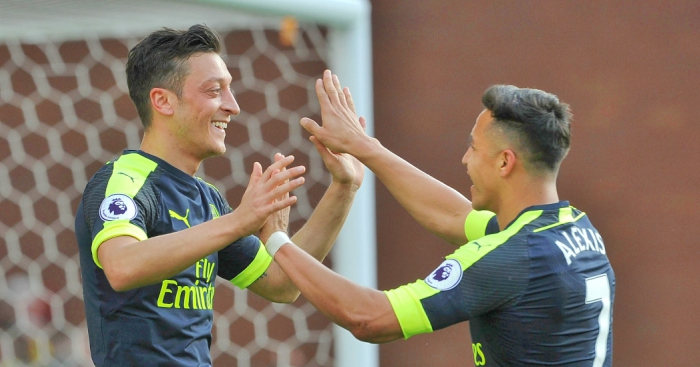 Premier League player – Michy Batshuayi (Chelsea)
Michy Batshuayi almost certainly envisaged a more captivating beginning and middle to the story that has been his first Chelsea season, but it was all worth the wait by the end. In his 18th appearance of the Premier League campaign – each as a substitute – he scored the goal that delivered the title to Stamford Bridge.

The Blues would have surely been crowned champions regardless, be that against West Brom on Friday, Watford on Monday or Sunderland on Sunday. But this was just reward for a player who was signed for £33million last summer, and has been assigned the role of chief bench-warmer throughout Diego Costa’s impressive season.

The 23-year-old never demanded more playing opportunities, nor did he request to leave. He will have been frustrated at the situation, but remained professional where others might have been tempted to rock a boat sailing towards glory. As a result, he has a memory to savour for the rest of his career, and was finally handed a start against Watford on Monday. He obviously scored, and will hopefully play more than 207 league minutes next season.

Football League player – Mark Cullen (Blackpool)
Between them, the eight sides contesting the Championship and League One play-offs scored three goals in their first legs. Mark Cullen managed that total by himself as Blackpool gained a slight advantage over Luton in League Two.

Huddersfield and Sheffield Wednesday played out a goalless draw at Hillsborough, as did Millwall and Scunthorpe at The Den. Fulham and Reading battled to a cagey 1-1 draw, while Bradford eventually went through to the League One final courtesy of a 1-0 first-leg win over Fleetwood. Three goals, little excitement.

Cullen’s hat-trick against his former side gives current employers Blackpool a slender advantage in the fourth tier. The club that only just scraped into the play-offs on the final day are on course to conquer a side who spent just one week outside the top six all season.

European player – Dirk Kuyt (Feyenoord)
Feyenoord needed to beat Heracles on the final day of the Eredivisie season to secure a first title in 18 years. They needed a hero. They needed a 36-year-old Dirk Kuyt to score a hat-trick in his second spell with the club. They probably didn’t need to be subjected to his singing voice, but we can probably let him off.

I honestly love him.

Best goal – Shinji Okazaki (Leicester)
Finally we have an answer to one of life’s eternal questions. No, not ‘Is there an afterlife?’, ‘Do aliens exist?’ or ‘What would Meatloaf not do for love?’. Each of those pale into insignificance when compared to the real conundrum: ‘Will Shinji Okazaki ever stop smiling?’

The answer, as it happens, is yes. But only ever when he scores quite wonderful acrobatic goals against Manchester City to end a goal drought spanning 23 games. It’s a specific criteria, granted, but that is only fitting for one of football’s rarer events.

Best own goal – Adrien Gulfo (Pully Football)
Before this week, Adrien Gulfo was an ordinary 26-year-old Swiss man with an extraordinary name. Now, he is the proud owner of the single greatest own goal of all time.

With lower-league side Pully Football – another incredible name – trailing 2-1 to FC Renens (rubbish) in the Coupe de Vaudoises semi-final, Gulfo decided to take matters into his own hands. Renens launched an attack down the right-hand side, with Gulfo the only defender back as the cross came in.

Okay, so I'm glad to say it is now official. The greatest own-goal of all time has been scored. pic.twitter.com/1rL3sPmn72

Pully Football managed to score twice to take the game to penalties, where they won 7-6. They will face Malley in the final on May 25.

A brief look at Pully Football’s squad completes the hat-trick of phenomenal names. One of Gulfo’s teammates is a striker called Junior Panda. What a guy.

Against Sunderland on Tuesday, Alexis Sanchez showcased the first half of that rare combination. He scored twice against the Black Cats to take his tally for the Premier League season to 23 goals. Only Romelu Lukaku has more.

But against Stoke on Saturday, the Chilean’s penchant for creativity took precedence over his predatory instinct. Here is a player often chastised for being greedy. He’d let you have his last Rolo if it meant he could have some teammates approaching his level.

Ed Woodward has spent the past seven days trying to fax this to the offices at the Bernabeu, hasn’t he?

For those thinking Carmona should've gotten a red in #PORvATL, this tackle by Fabra of #BocaJuniors in #Superclasico also only got a yellow. pic.twitter.com/3dbaSlWZu6

Best tactical move – Jurgen Klopp (Liverpool)
It was back in mid-April, when Liverpool had just scraped past Stoke to maintain the weakest of grips on a place in the top four, that Jurgen Klopp was first asked about his lack of a ‘Plan B’. Some fans had complained, certain neutrals poked fun, and numerous opinion pieces were penned on the topic in the months beforehand. But this was the first time the manager himself was actually questioned over it.

“If somebody speaks to me about ‘Plan A’ or ‘Plan B’ I don’t really understand this, it was never the case,” was the simple response of a man who found the criticism baffling. So it is only fair that it is highlighted when he shows the tactical flexibility and forward thinking that he was supposedly lacking earlier in the season.

In a game Liverpool had to win, Klopp engineered their finest away performance of the season in dismantling West Ham. Philippe Coutinho revelled in a deeper midfield role, Daniel Sturridge shone with support from Divock Origi, and the manager’s switch to a diamond formation proved an inspiration. Champions League football beckons. Until they draw 0-0 at home to relegated Middlesbrough.

Worst tactical move – Jose Mourinho (Manchester United)
Jose Mourinho’s best tactical move of the season, save for convincing the wider populace that his £150million summer outlay was not sufficient enough to build a squad that does not necessitate abandoning one competition in order to prolong their chances in another, was to completely nullify Eden Hazard when Manchester United beat Chelsea 2-0 in April. He did so by telling Ander Herrera to shadow him like a nervous child does their mother on the first day of school.

That tactic works when you employ it with a master of sh*thousery. Axel Tuanzebe is too young to have learned those dark arts just yet, and so asking him to man-mark Christian Eriksen was quite the risk. The youngster did admirably, but that ain’t enough to counter the great Dane.

Also, don’t use a central-defensive partnership of Smalling and Jones again. Chas and Dave, guests of honour on White Hart Lane’s farewell, would have done a better job.

Premier League loan player – Wojciech Szczesny (Roma and Arsenal)
Two Premier League goalkeepers temporarily departed these shores for sweet Serie A salvation in the summer. But while Torino president Urbano Cairo was openly admitting that the Italian side “probably didn’t expect so many mistakes from an England international” this season in the form of Joe Hart, Wojciech Szczesny continues to impress for Roma.

His latest starring role came on Sunday, when the Old Lady rolled into the capital. Gianluigi Buffon, Leonardo Bonucci, Miralem Pjanic, Mario Mandzukic and Gonzalo Higuain all started as Juventus fielded a srong, albeit not quite full-strength XI, but Szczesny made four saves as Roma kept the title race barely alive with a 3-1 win. He’s coming for you, Petr Cech.

Fans of the week (Middlesbrough)

#Boro fans chan "off, off, off" urging referee Anthony Taylor to send off Brad Guzan… their own goalkeeper

Picture of the week

Dembele of the week – Boubacar Dembele (FC Meyrin)
For the second time this week we must plunge the depths of the Swiss football pyramid to find Meyrin FC in the third division. They sit atop 1. Liga after a 4-0 mauling of previous leaders FC Monthey this weekend. According to reports from the game, Meyrin’s left-back ‘defended well and offered an outlet in attack – 7/10’. That man was Boubacar Dembele.