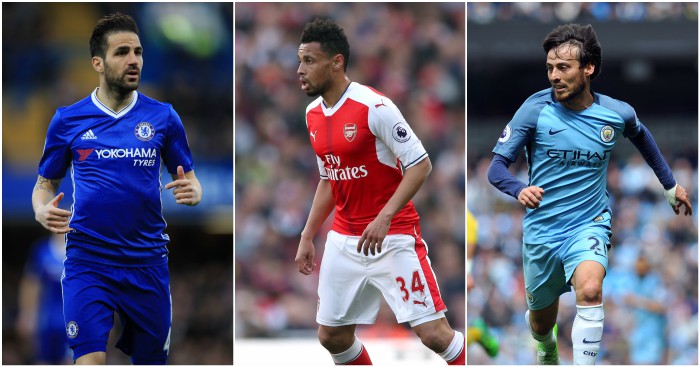 Premier League player – David Silva (Manchester City)
Well of course. If there is ever an opportunity to shower David Silva with compliments, take it. And the Spaniard’s performance on Saturday certainly gave me the chance to wax lyrical. In that sort of mood, there’s almost no point trying to tackle him, instead waiting until he passes on the ball before attempting to get it back.

Silva was one of three Manchester City players in our top ten attacking midfielders of the season, and the highest placed. He has been asked to play in a slightly deeper role and has not enjoyed his best season in a City shirt, but still has the potential to produce moments and performances that make you want to ring three friends and talk through what you’ve just witnessed. I’ll miss him when he’s gone.

Football League player – Chris Cohen (Nottingham Forest)
I’m not even sorry for taking up two minutes of your time here, but before I get accused of parodical favouritism towards my beloved club (and that’s just from Winty and Matt), let me explain. Chris Cohen hasn’t just suffered one career-threatening ligament injury. He hasn’t just suffered two career-threatening ligament injuries. He has suffered three.

In an interview with the Guardian, Cohen explained that he had invited Forest’s medical staff to his wedding, such was their effect on his life. He had to have lessons in how to run and tackle, such was the physical and psychological damage to his knees and mind respectively. And through it all, he just wanted to play for Forest.

Cohen is the club’s captain and longest-serving player. With Forest needing victory to survive relegation to the third tier, he scored the second, vital goal in front of the Trent End on his 300th appearance, and a stadium erupted. Cohen just had one thing on his mind – an embrace with physio Andy Hunt.

“I say it to my wife all the time that I believe if you work hard all the time and keep doing the right things, you will get your rewards,” Cohen said. “For me personally and for my family that is the kind of moment that has been worth all the dark times. It is only football, but at the same time it is what I love to do and you can see the difference it makes to people’s weekends and perhaps even to their lives.

“I went over to the physios because they have become a big part of my life. Just because I am fit now, does not mean I do not spend a lot of time up there with them. I still spend hours with them, so it was nice to share the moment with them. They have all been unbelievable for me – they have made it possible for me and my family to have days like that.”

And the tears of joy and pride and love are flowing again, all over this keyboard.

European player – Edin Dzeko (Roma)
While Milan fans moaned at not being treated to the sight of Francesco Totti, Edin Dzeko was demonstrating that the current Roma crop aren’t bad either. Now 31, Dzeko is enjoying the best form of his career. Two goals in the San Siro took him to a ridiculous 27 for the season.

Three goals in his final three games of the season will make Dzeko the third player since 1959 to score 30 in a Serie A season. Not bad for a City reject.

Best goal – Vincent Kompany (Manchester City)
A dearth of truly spectacular goals in the Premier League this weekend, although nominations are due for Bournemouth’s team goal, Raheem Sterling’s volley and Danny Welbeck’s header. Yet it’s Vincent Kompany’s finish that gets the nod, if only because it so easily could have gone 25 yards over the bar. Salute the swinger.

Best pass – Cesc Fabregas (Chelsea)
Your Cesc is on fire. Cesc and candy. Let’s talk about Cesc. I wanna Cesc you up. Cescy MF. Cesc-ual healing. Get up (I feel like being a Cesc machine). Take your pick of those laboured puns, but it was a bloody lovely chipped through ball that took out three Middlesbrough defenders and found Diego Costa to score Chelsea’s opening goal. Is Fabregas actually getting better for not playing?

Best save – Jordan Pickford (Sunderland)
There is an argument that Pickford is only singled out for praise because Sunderland’s defence keeps him so busy, but the standard of his best saves make that view look foolish. On first glance it seemed like Abel Hernandez’s shot had just hit Pickford in the face, but replays show he somehow had the reactions to push up a hand and divert it wide of goal.

#SAFC keeper Jordan Pickford could have made this save with both hands behind his back! pic.twitter.com/1PXUOSvwG8

Worst tactical move – Jurgen Klopp (Liverpool)
Managers make mistakes and games go badly, but one of the pillars of successful coaching is identifying and resolving those errors as soon as possible. Liverpool were laboured and sluggish from the first minute against Southampton, so why on earth did it take Jurgen Klopp until the 70th minute to finally make a change?

Attempted block of the week – Francis Coquelin
Francis Coquelin here, looking like a drunk long jumper going for gold. You can’t criticise that amount of passion.

I’ve given away the happy ending to this story, but on Sunday Awoniyi made himself a star. Brought off the bench with seven minutes remaining and with NEC desperate for a goal to give them any hope of avoiding a relegation play-off, the Nigerian scored the winner five minutes later and was booked for going mental with his celebration. Good on you, fella.

Merchandising cock-up of the week
“Reckon you can turn these into some jumpers for the grandkids, love?”

You think YOU'RE having a bad day pic.twitter.com/dM71gWIjCC

Space of the week
The gaping hole in between Brad Guzan’s legs, and I’m not being tawdry. After Chelsea’s three goals all went between Guzan’s left and right, it raised important discussion of the collective term for a hat-trick of nutmegs. My vote goes to ‘a spice rack’.

Dig of the week

Old man quote of the day
“There’s been a bit of moaning and groaning they tell me on the websites and the internet. People who don’t go to games, they sit on there and try and do stuff. I’m not into it so I don’t understand how it works but it seems to get out there and nobody knows who’s saying it or doing it” – Tony Pulis.

Dembele of the week – Aliou Dembele
Manchester United’s 25 matches unbeaten was not the only spectacular run to come to a crashing end this weekend. In France’s Ligue 2, Chamois Niortais had gone a frightening four matches without a clean sheet. I like Chamois Niortais, because it’s impossible not to say the club’s name in a Danny Dyer voice. If their nickname isn’t ‘Pwopa’, something must be done.

They were able to end that slump with a goalless draw at Le Havre, thanks in part (he’s being modest) to the defensive midfield role carried out by their captain. As the official Niortais website (no, not that kind of Niortais website) says: ‘From the start, the game is locked in midfield between the two formations.’ Gan on, Aliou.