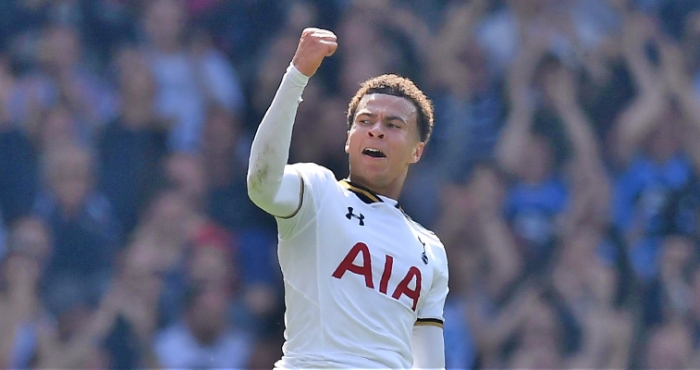 Premier League player – Wilfried Zaha (Crystal Palace)
Many will have identified the battle between Wilfried Zaha and Nacho Monreal as being one of the most important in the build-up to Monday’s game; few will have predicted the eventual outcome. While one ended the evening among a group of players being jeered and admonished by their supporters, the other was being praised and cherished by pretty much everyone else.

The Arsenal left-back coped admirably, but there is only so much you can do against a player in the form of his life. Zaha might not be at Crystal Palace for too much longer – certainly not if he continues to improve on his already wonderful recent performances. The winger was a delight to watch against Arsenal, providing two assists as the Gunners were left in disarray. He completed eight dribbles – three more than any other player – and was really bloody good. Just imagine if he had any passion.

Football League player – Alex Pritchard (Norwich)
Alex Pritchard admitted he “couldn’t wait to get out” when he finally left Tottenham last summer. The 23-year-old had advanced through the club’s youth system, making his first-team debut as a substitute for Gylfi Sigurdsson on the final day of the 2013/14 Premier League season.

Much like Sigurdsson, Pritchard has found his feet in a new home. Four separate loan spells in five years threatened to derail his development, but he is realising his potential at Norwich. The Canaries inflicted a 7-1 defeat upon play-off chasing Reading, manned by Alan Irvine but masterminded by two-goal Pritchard.

European player – Andres Guardado (PSV)
Michael Antonio managed the feat for West Ham against Crystal Palace earlier this season. Mesut Ozil accomplished it for Germany in their World Cup semi-final demolition of Brazil in 2014. Lionel Messi, the perennial one-upper, has done it thrice in his career. And that eclectic trio were joined by Andres Guardado on Sunday, the Mexican providing a hat-trick of assists for PSV in their 5-0 victory over Willem II. He even scored one of the other two goals himself as Phillip Cocu’s side closed to within one point of leaders Feyenoord at the top of the Eredivisie.

Best goal – Dele Alli (Tottenham)
There was a stage on Saturday where Tottenham were struggling to break down Watford, who were arguably the better side in the opening stages at White Hart Lane. Then, with just over half an hour gone, Dele Alli received a short pass from the excellent Heung-min Son, before bending an exquisite strike around the despairing Heurelho Gomes and into the top corner.

He stepped up when needed, and how. It was the sort of strike that would have left Steven Gerrard, Frank Lampard, David Beckham, Xavi, Andres Iniesta, Pele, Diego Maradona and Jay Spearing blushing. And he was only 20 (he’s an old man now).

Best pass – Georginio Wijnaldum (Liverpool)
Following his midweek assist for Bournemouth’s Benik Afobe with a pinpoint knockdown for Charlie Adam to almost double Stoke’s lead on Saturday, Georginio Wijnaldum considered a sudden change of approach. ‘What if?’ thought the Dutchman. ‘What if I pass to one of my own teammates? What happens then?’

The gamble paid off for both the midfielder and his side. Liverpool’s dramatic comeback was completed less than two minutes after Philippe Coutinho dragged them level at the Britannia Stadium. Roberto Firmino’s winning volley was sumptuous, but the assist had to be, and was, perfect.

Best save – Simon Mignolet (Liverpool)
But of course, without Simon Mignolet there would have been no dramatic comeback. The Belgian’s save from the aforementioned Adam effort spared Liverpool the embarrassment of conceding to their former employee, but that paled in comparison to his most telling contribution.

Not a minute had passed since Firmino granted the Reds a 2-1 lead when Stoke broke down the left-hand side in search of an immediate equaliser. Marko Arnautovic’s searching cross could not find the boot of the sprawling Ragnar Klavan, but it did locate £15million striker Saido Berahino. Unfortunately for him, his wait for a Stoke goal continues as Mignolet stopped his point-blank effort from no more than six yards out.

Jurgen Klopp was understandably delighted with his keeper. “He said to me: ’Don’t give corners away! Keep the ball in your hands, don’t push it away’,” said Mignolet after the game, discussing his on-pitch post-match celebrations with the manager. “He’s always there to have a joke.”

Little did Mignolet know that the post-match hug was just a cop out.

That list might resemble something of a visualised footballing theory of evolution at first glance, but it is also a small collection of people who felt that Craig Pawson’s punishment did not fit Sebastian Larsson’s crime. And I’m not about to argue with that leftie luvvie Lineker.

Best tactical move – Sam Allardyce (Crystal Palace)
“Tactically the players were aware of how to beat Arsenal,” declared Sam Allardyce, having just devoured his starter of a plate of chips with a side of chips.

As the Crystal Palace manager slurped down his pint of gravy, he continued to reflect on a deserved 3-0 victory over Arsenal: “The first thing was to defend and frustrate them,” he said, “keep them playing sideways, then use the space behind the full-backs. Arsenal have been weak defensively, they leave the centre-backs exposed.”

By the time his main course of a pie with the filling of another pie arrived, the 62-year-old was positively beaming. “We won a lot of possession off them and created lots of chances,” he added in between forkfuls.

Allardyce was wolfing down a mashed potato and beef sundae when he delivered the killer blow to arch nemesis Arsene Wenger. “We all know Arsenal are going through their worst spell for years, but the only way to take advantage is by playing well. Everything worked perfectly for us today,” he said, marching off into the sunset, safety surely secured.

Worst tactical move – David Moyes (Sunderland)
According to Victor Anichebe, David Moyes tells his Sunderland players “every week to stay in the game”. One must ask whether the Scot reiterated that message when 1-0 down at half-time against Manchester United on Sunday; the game as a contest was over within a minute of the restart as United doubled their lead. Not even the Britishness of a Jack Rodwell and Lee Cattermole midfield could spare him.

Premier League loan player – Takuma Asano (Stuttgart and Arsenal)
Arsenal fans: Things might seem difficult now, but just imagine the scene. Steve Bould is in interim charge with Arsene Wenger on trial for ‘the Arsenal Fan TV incident’. Alexis Sanchez has been sold to Crystal Palace, Olivier Giroud can’t get up from the bench and free agent Emmanuel Adebayor has rejected the offer of a triumphant return, stating that the heroes’ welcome he would receive would be too emotional.

There are no funds available – Wenger’s legal fees are not cheap – and so the club cannot sign the striker capable of delivering a first Premier League title in 14 years. Bould peruses the squad list and decides to revert to a good old-fashioned 4-4-2 with two relatively unheard of strikers. Yaya Sanogo helps fire the Gunners to glory, but Takuma Asano is the real star.

Asano was the derby hero on Saturday, doubling his tally for the season with two goals for loan club Stuttgart against local rivals Karlsruher. He is the goddamn future.

Timing of the week

?? A group of football mad Swedes will descend upon the SoL tomorrow for their first-ever game

Fan of the week

Respect to the Sheff Utd fan at Northampton who charged onto the pitch at full time with the corner flag. pic.twitter.com/ZfGR9eV0d5

‘How did you ever cope?’ of the week
“After games, we would have chicken burgers and potato wedges and he then changed them to sweet potatoes and pasta.”

One could only commend the bravery of Danny Simpson as he revealed the extent of Claudio Ranieri’s iron rule at Leicester.

Brit abroad of the week

This just in: Tony Adams is yer da.

Dembele of the week – Garra Dembele (FC Solothurn)
Mousa got pushed over by Abdoulaye Doucoure as Tottenham thrashed Watford. Ousmane could not last the hour as Dortmund were humbled by Bayern. Moussa was not afforded a start as Celtic eased past Kilmarnock. But even if any of the reputable Dembeles had impressed over the weekend, it would have taken a gargantuan effort to overshadow Garra. The 31-year-old struck twice, including an 87th-minute winner, as FC Solothurn beat Zug 94 3-2 in Switzerland’s fourth tier.