Home Watford Welcome back from the brink, Saido Berahino 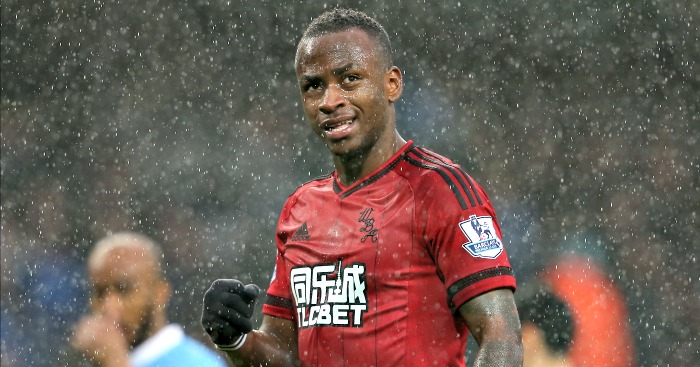 First it was Liverpool, then Tottenham. Manchester United joined the party soon after, and were followed by Chelsea and Newcastle. Before Saido Berahino knew it, even future champions Leicester, European connoisseurs West Ham and upwardly mobile Everton were interested in his services.

Justifiably so. Only seven players have registered 20 goals or more in all competitions in a single English season since 2014/15. Jamie Vardy is a Premier League champion; Harry Kane has 49 league goals across two campaigns; Sergio Aguero is a world-renowned talent; Romelu Lukaku has been valued at more than £50m; Arsenal have rejected a £34m offer for Alexis Sanchez; Olivier Giroud is Olivier Giroud. Then, among the established talent and multiple trophy winners, there is Berahino. His 20-goal haul came not with Arsenal or Manchester City, but with a West Brom side that finished 13th the season before last.

The Burundi-born forward was once the Next Big Thing. It exemplifies his fall from grace that an individual once coveted by the country’s finest sides for £20m is now the punchline of a joke which starts ‘Crystal Palace, Stoke and Watford walk into a bar with little more than £10m each’. In a modern-day world where player prices are inflating to near-unfathomable levels, Saido Berahino is the anomaly: a young player whose value has decreased over time.

It could have been so different; it should have been. After making his Premier League debut in the previous season, the West Brom forward announced himself at the beginning of the 2014/15 campaign. He scored seven goals in ten appearances, and was handed an England call-up by November 2014. An opportunity to stake his claim for a Euro 2016 squad place had been earned.

Potential suitors had had their interest well and truly piqued. For Berahino, his short career thus far had peaked. The 22-year-old appeared in the squads for both subsequent England games, but did not feature in either fixture. He returned to club action, but scored just seven goals in the following 28 league games. Tottenham retained a particular desire to sign him and carried it into summer 2015, but Daniel Levy refused to offer anything more than the change found down the back of his sofa. The pursuit would unofficially be granted ‘saga’ status as West Brom showcased the new-found power of the Premier League’s ‘rest’ by retaining their prized asset in the face of pressure from the elite. Berahino was the unassuming guinea pig for the experiment.

In West Brom counterpart Jeremy Peace, Levy had finally found his match. There was only one loser as rock met hard place, and it was neither of the two sides; the forward would stay at The Hawthorns. Where some failed ‘transfer sagas’ result in the subject actually improving their standing, such as Wayne Rooney earning a £300,000-a-week contract at Manchester United in 2013, or John Stones recovering from “accidentally” handing in a transfer request to be still linked with a £50m exit despite a disappointing season for Everton, Berahino’s ended with his reputation in tatters. Tottenham did not pursue a move, other clubs were put off by West Brom’s hardline stance, and the Baggies sought to make an example out of the striker. He would start 17 Premier League games last season, often out of position, sometimes out of shape, and always out of confidence.

There is little wonder Berahino has reportedly rejected West Brom’s attempt at rebuilding a bridge that has been ablaze for far longer than Will Grigg. But the Baggies’ offer of a new four-year contract has been returned to sender with respect, not anger or petulance. The Daily Mail report that the 22-year-old ‘is happy to stay at the club if his future isn’t finalised by the end of July’, as he ‘wants to avoid a repeat of last summer’ and ‘ensure he is fully focused on the season ahead’. After being characterised as any or all of a) a snake, b) lazy, c) overweight and d) disloyal for the past year, this is a welcome development for a young star who has learned from his mistakes.

It is a welcome development for his club, too. Only Aston Villa scored fewer Premier League goals last season, as Pulis sought not only to cut off his nose, but to sever an ear, saw off his chin and gouge out an eye just to p*ss his face off. The Welshman has his 20-goal striker back with a renewed motivation and vigour.

The curious thing about Berahino is that we cannot be truly sure of just how good he is. The forward has been treated more as profitable commodity, less as human and footballer by two sides over the past 18 months, and while both have since moved on, the individual’s reputation was almost irreparably damaged. He has 23 goals in 100 Premier League games while learning his trade at a club whose current style patently does not suit him. If, as expected, he sees out the final year in his West Brom contract, he has a final chance at redemption at his first club, and each of his former suitors will watch with anticipation. After the acrimonious nature and fall-out of his near departure, it would complete a rather jagged full circle.

We are all guilty of forgetting about Berahino the player, and simply analysing him through a microcosm of his decreasing transfer value. This is the joint-fifth highest goalscoring Englishman over the past two seasons; only Kane, Vardy, Wayne Rooney and Jermain Defoe have more. This is a 22-year-old literally linked with a move to every current Premier League side except for Swansea, Bournemouth and Sunderland. This is an individual who, despite already being called up to the national side, was barely even considered for Daniel Storey’s list of the six likely new England caps. Whether he remains at West Brom, or joins any of the current trio chasing him – Crystal Palace, Stoke or Watford – a rejuvenated, refocused and refined Berahino would be an asset.

He may no longer warrant links with Liverpool, Tottenham or Manchester United, but Saido Berahino’s return as player, not pawn, must be embraced; the 22-year-old was almost lost to the transfer ether. There will be no ‘saga’, no Twitter outbursts and no deadline-day disappointments this season, just a talented player with a point to prove and a reputation to restore.