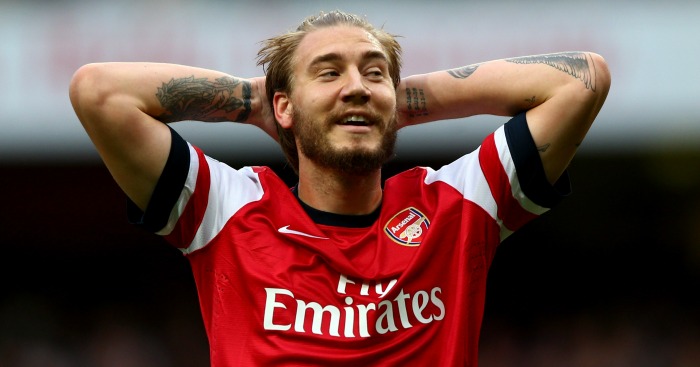 “We saw him as menace to the club. We had to take action. The players must realise they are part of public life and they should behave accordingly” – Wolfsburg director of sport Klaus Allofs, April 4, 2016.

Nicklas ‘That went well’ Bendtner strikes again! No sooner had everybody’s favourite sitcom player promised that he was a changed man, such good intentions had fallen into the dust. It’s just like night following day for the footballer who cried wolf. Another bridge burned, another shot at redemption spurned.

Speaking as someone who is still getting used to the idea, it is a strange feeling when Bendtner joins your club. For so long he’s felt like the property of football, or comedy, or football comedy. Yet here he is, joining Nottingham Forest on a two-year deal that should force a thorough reassessment on the potential height of optimism.

The appropriate reaction should be amused but deep concern. Bendtner turns 29 in January, and has started 77 top-flight league games in his entire career. By way of comparison, Cesc Fabregas – eight months older and in the same Arsenal team – passed that mark two months before his 20th birthday. Almost a third of Bendtner’s top-flight starts were when on loan at Sunderland in 2011/12. If that makes you wince, it should.

Yet the surreal nature of Bendtner’s reputation is that the doubts can quickly be tempered. A resigned ‘He won’t’ becomes ‘He couldn’t, could he?’ becomes ‘You know what, he just might’. The star of a thousand memes really could have just been a star. The hope is that he still can be.

This is a striker who Arsene Wenger kept faith with for eight years, who Antonio Conte brought to Juventus, who Dieter Hecking signed for Wolfsburg. Bendtner has a Champions League hat-trick for Arsenal, against Porto in the last-16 round in 2010. Only five players have scored more international goals for Denmark.

“I personally believe in his qualities,” said Wenger. “It’s just down to attitude and fighting spirit. When he has that, Nicklas can be an unstoppable striker.” Bendtner makes managers believe in him, to the point that he becomes lodged in their blind spot. Only he could have managed only 77 top-flight career league starts, yet have appeared in the Champions League in seven of the last nine seasons and scored four Europa League goals in another.

If coaches have continually focused on the Dr Jekyll, Bendtner has happy enough to dress up as Mr Hyde. His rap sheet includes a drink driving conviction, an arrest for trying to kick down a door in his apartment block, being escorted from a club with his trousers falling down and being punished by police for rubbing his genitals on a car and threatening the driver. All in a night’s work for the parody footballer.

One area in which Bendtner has never struggled is confidence. “I want to be top scorer in the Premier League, top scorer at the World Cup and, within five years, I want to be among the best strikers in the world,” the Dane said in 2009. “Trust me, it will happen.”

It’s that last line that jars so much, because there is an inherent sadness to Bendtner’s inability to fulfil his evident potential. Sympathy will be thin on the ground for a young man who has been handsomely rewarded for regularly failing to take chances on and off the pitch, but it is clear that the striker has been wholly undermined by his own indelible flaws of character.

Bendtner has been punished because he will… not… learn.

Yet here’s the thing about Bendtner: it’s hard to dislike him. He retains the air of the cheeky scamp, the school rogue who spent lunch breaks outside the headmaster’s office but the teachers still wanted to do well. Beneath the confident exterior lies a childish naivety and a man-child that just wants to succeed. Peel back another layer to find the bad side of a conscience that trips him up after each step forward.

The chasm between Bendtner’s public displays of narcissism and the reality of a career heading to the scrapheap is growing with every missed shot at reclamation. Back in the second tier for the first time since 2007, an international striker has come full circle.

An awful lot might have changed in those nine years, but the same old Bendtner still remains, the man-child with big ideas and grand designs, but no goodwill. The only changes are the rise of a cult following, a farcical social media persona and an increasing sense of ‘what might have been’.

“The tiger stands at the end of the food chain,” Bendtner said in one of his more philosophical moments. “He eats to survive, without any compassion, he doesn’t even feel it. He is the predator an animal of dangerous beauty.” While he focuses on one of the big cats, the rest of us dwell on another. Can this leopard ever truly change his spots?