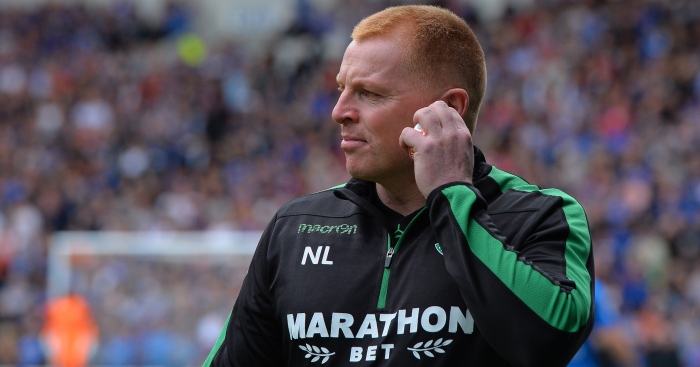 If you were in a crowd at a football match, took a coin out of your pocket, aimed it as the opposition team manager and threw it at his head, who do you think would be to blame for you doing that?

That’s what someone did to the Hibernian boss Neil Lennon last week as he was celebrating the chalking-off of a last-minute winner for Hearts.

Like me, you’d probably think the person to blame for this was not Lennon himself, but the actual coin-thrower simply because, well, they actually threw it. But no, this is football and behaviour inside a football stadium seems to be treated differently to anywhere else. And that’s why former Scottish Police Federation chairman Les Gray actually laid the blame at the manager’s feet.

“There’s no justification for what happened to Neil Lennon,” he said, shortly before offering a hell of a lot of justification. “I thought his conduct, before this incident, was shocking and, quite frankly, I will be amazed if the football authorities and even Police Scotland don’t decide that they need to have a word in his ear to say ‘Look, you can’t do that in these circumstances. He really could have caused a riot last night.”

If this sounds like a classic ‘she was asking for it’ argument, that’s because it is. Many have stood up for Lennon, but too many seek to lay some of the blame onto him.

Haven’t we got over this by now? Can’t we really see where the blame lies for such crimes of violence? The coiner may get busted, but they’ve already been excused, if not in law, then in the wider culture. And that’s why it continues to happen.

At this point we have to use a word that isn’t much used outside of football, and that word is ‘goading’ – Lennon, it is said, was goading Hearts fans throughout the game, in response to their abuse towards him. You can be quite sure that he didn’t turn up and start abusing Hearts fans apropos of nothing. And you know what, even if he had, that would still be no excuse for an act of violence towards him. To dilute, in any way, the coin thrower’s responsibility is to guarantee it will keep happening. It is a get-out-of-jail-free card.

After all his years in football, Lennon will not lie bow down, he will not shut up and go quietly. If someone is, in the vernacular, gaein it tae ‘im, he’ll be gaein it back, pal. And he has suffered from this more than most. Later he spoke eloquently about how much he has had to endure over 18 years and it is a shameful litany which lets all of Scottish football down. Many others from varied backgrounds get abuse too, he is certainly not alone, which is precisely why we need to establish who is to blame for this once and for all, not just in this instance, but in principle.

'You call it sectarianism in Scotland – I call it racism.'

We know that too many in the game see managers’ and players’ role in football’s abuse culture as being a sop, to soak it up and never ever respond, as though it is all part of the job; as though it is to be expected and if you rile fans, you’ve only got yourself to blame if they kick off.

This has become an endemic problem and it is echoed on social media where, if someone in the public eye protests at suffering abuse, they are also often told that you should expect it. We’ve all had this on Twitter from people who say in essence ‘if you don’t want abuse, don’t write something for public consumption’ as though abuse is the same as disagreement or an alternative viewpoint. Those people always seek to blame the player, writer or manager for the fact they are abusing them. See Wilfried Zaha for an example.

This is commonplace. In all walks of life, abusers seek to lay the blame for their abusing onto their victims. This is one of the central tenets of domestic and sexual abuse. “If only you’d do what I want, then I wouldn’t have to hit you.” “If you didn’t wear that short skirt, I wouldn’t have to do this to you. What do you expect going out like that?”

My missus, when a student, had her halls of residence room literally door torn off its hinges by a jealous boyfriend who thought she was in inside with another bloke. She wasn’t, but even if she had, that would not have excused his behaviour. When she reported it, nothing was done and she was told in no uncertain terms by the head of security that she should expect this if “you’re a pretty girl who leads men on”. I don’t have space to go into how wrong on so many levels this was, but again it is classic victim-blaming.

If a manager or player stands up for themselves and won’t accept the abuse, according to the twisted logic, this is the point at which they become culpable for anything. It’s their fault. They ‘provoked’ it. You ‘could’ve caused a riot’. It is so wrong but you hear it all the time.

Ex-Celtic man Gary Caldwell even suggested on BBC Radio Scotland’s coverage of the game that Lennon “sometimes brings it on himself”.

Obviously, Lennon was not asking to have a coin thrown at him and it must be said again, he is not culpable for someone doing such a thing. Even if he stood there and begged for someone to throw a coin at him, he still would not be responsible for someone doing so. The blame for that lies wholly on the thrower. That surely is not difficult to understand, is it? No. So why is anyone seeking to mitigate the blame here? Why is Caldwell, presumably inadvertently, giving licence to fans to behave like this?

It’s not a huge leap of imagination to say that Neil Lennon, nor anyone else, could say anything to me or to you that would make us want to coin them. Indeed, I think if I was sitting behind the dugout and he started swearing at me and taking the pish, I’d find it funny. The idea that it would so enrage me that I might start some sort of rioting is – and I cannot say this strongly enough – abso-bloody-lutely insane, only surpassed in its insanity by the likes of Caldwell and Gray saying Lennon is bringing it on himself. Do they think it is a natural law of the universe that some people just can’t help themselves throwing coins when ‘provoked’? And immediately they say that, the criminal is much less guilty.

This is why it, in part, that such behaviour continues. A linesman was hit with a coin in a recent Livingston v Rangers game. Rangers player Alfredo Morelos was hit by a coin while celebrating a goal against St Mirren. Were they ‘bringing it on themselves’ by scoring a goal and being an official?

It took Hibs chief exec Leeann Dempster to have to state the obvious, sensible truth.

“I’m sorry I do not support anyone who says the manager having an interaction with supporters in that manner deserves to be hit by an object.”

This shouldn’t even need saying. But hey, welcome to the weird world of football’s abuse culture. It’s not dead yet. Will it ever be? Certainly not while there are plenty of enablers who don’t seem to understand where the blame lies.