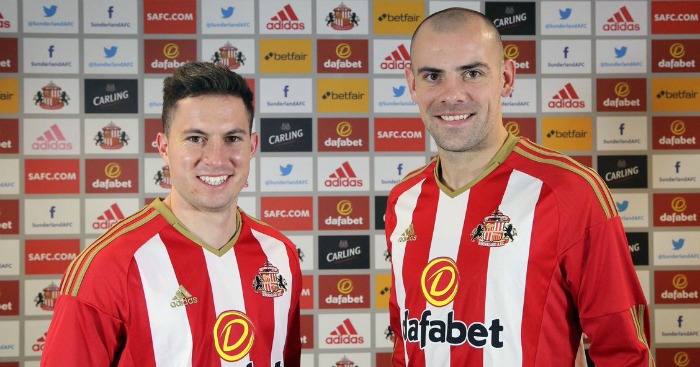 Sunderland have announced the signings of Darron Gibson and Bryan Oviedo from Everton for a reported joint fee of £7.5m.

Moyes was given money to spend after Sunderland sold Patrick van Aanholt to Crystal Palace, and has raided his former club. Again.

“Bryan is a very good player and he’ll help us get forward,” Moyes said. “He’s quick and overall he’s a decent left-back.

“I signed him for Everton from Copenhagen as cover for Leighton Baines at the time, and he’s only not getting in because of how well Leighton’s done.

“He’s 26 which is a good age for us and I think he’s a really good character – a good boy – and I’m hoping he’s someone who will help us over the years.”

“We’ve got Darron on an 18-month contract and I think he’s a very good footballer; he’ll add a bit of quality with his passing and his play and I’d love him to add goals.

“He has a really good strike and if he can add goals from midfield it would be a big bonus.”