"A fans' mosaic depicting the poppy was displayed during the anthem of Wales." It could get them in trouble. 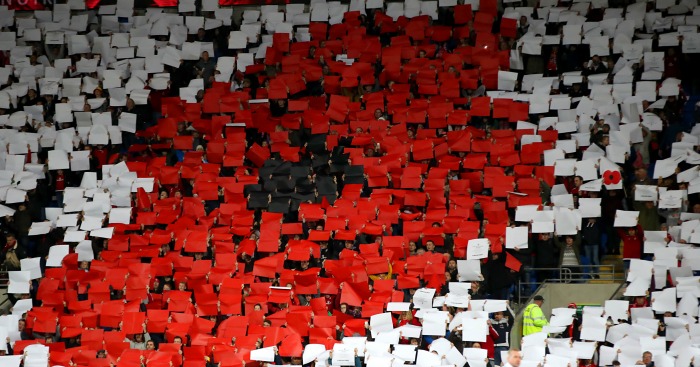 The Football Association of Wales has announced it has been charged by FIFA over supporters wearing poppies in the crowd during the match against Serbia.

World governing body FIFA on Wednesday opened disciplinary proceedings against Wales and Northern Ireland in relation to their acts of remembrance at World Cup qualifiers against Serbia and Azerbaijan respectively.

Both the FAW and the Irish Football Association have vowed to contest the charges they face.

But the FAW has gone further by detailing the incidents which FIFA has confirmed it is investigating, which include the fact of “some supporters in the stands wearing the poppy”.

FIFA’s tough stance on the poppy, as part of its Rule 4.4 concerning political, religious or commercial messages, caused a furore in the build-up to and over Armistice weekend.

England and Scotland defied the governing body in their World Cup qualifier at Wembley by wearing the symbol on their black armbands and are also facing disciplinary action.

Wales and Northern Ireland obeyed FIFA’s ruling and wore plain black armbands, but still marked the occasion in other ways including the laying of wreaths and poppy mosaics in the crowd.

As well as fans wearing poppies, the FAW said FIFA is also investigating the fact that: “A member of the armed forces was holding a bunch of poppies at the exit of the tunnel.

“A fans’ mosaic depicting the poppy was displayed during the anthem of Wales.

“A banner depicting the poppy was also displayed by the supporters of Wales before the match started.”

In a statement, FAW chief executive Jonathan Ford said: “Naturally as an association we are disappointed and surprised at the news. Our intention was to show respect on Armistice weekend which we feel we did in the right and proper way.

“We also adhered to the rules and regulations of the competition and the communication from FIFA prohibiting the FAW request for the players to wear the poppy symbol on the armbands or the field of play.

“We are particularly disappointed that one of the charges relates to supporters in the stands wearing poppies. Naturally as an association we will strongly contest the charges.”

Likewise, Northern Ireland have defended their acts of remembrance.

An Irish FA spokesman said: “The Irish Football Association will robustly defend the disciplinary charges that have been levelled against it by FIFA regarding acts of remembrance at the World Cup qualifying match between Northern Ireland and Azerbaijan on November 11.”

Prior to the Wembley match, England and Scotland both said they were confident they would be able to successfully appeal against any punishment, particularly as they believe a clear precedent was set in 2011 when England, Scotland and Wales were allowed to wear armbands with poppies on them during three November friendlies.

The new regime at FIFA, which is led by president Gianni Infantino and general secretary Fatma Samoura, views this very differently, however, and is determined to enforce the letter of the law when it comes to keeping what it sees as external distractions and potentially inflammatory messages out of the game.

All four nations now face the possibility of a fine, while in theory even a World Cup qualifying points deduction is possible.

In announcing the disciplinary case, a FIFA spokesperson said: “The disciplinary committee decided to open proceedings against the Irish Football Association and the Football Association of Wales in relation to several incidents involving the display of poppy symbols reported after the matches Northern Ireland-Azerbaijan and Wales-Serbia respectively.”