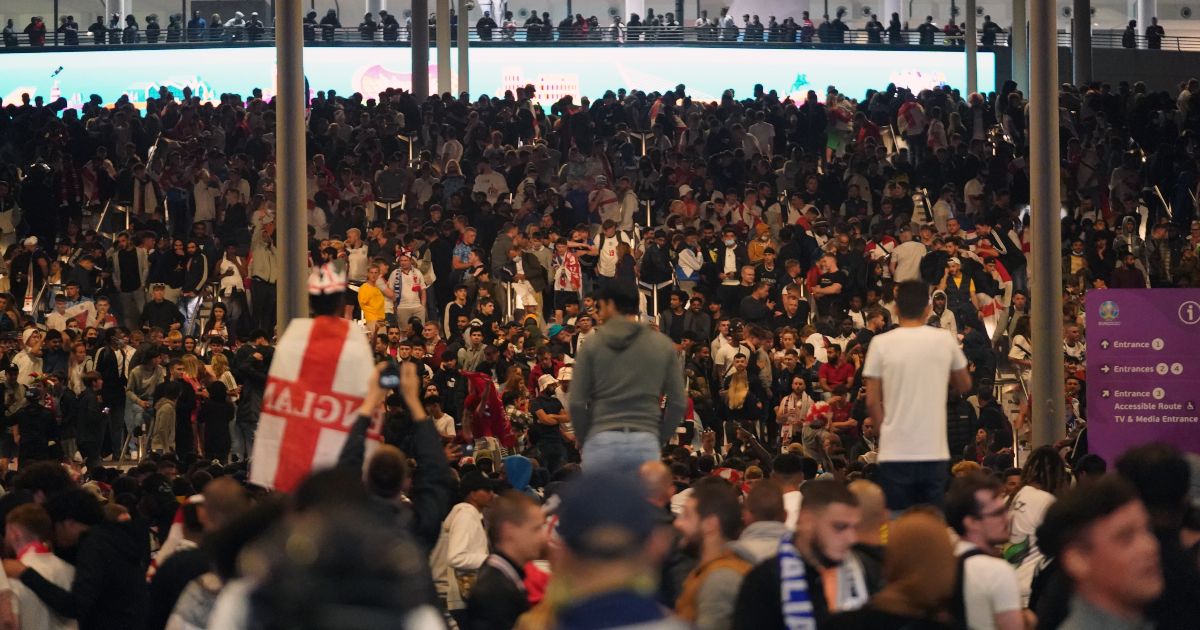 The Football Association says it will conduct a full review into how people without tickets were able to breach security and gain access to Wembley for Sunday night’s Euro 2020 final.

A stadium spokesperson said during the match on Sunday that a “small number” of people had got into the stadium and that security staff and stewards were working to remove them.

However, there have been reports of some ticketless people being inside the stadium for the whole match, and of genuine ticket-holders being afraid to confront people occupying their seats.

The security operation around the match has been widely criticised, and FA chief executive Mark Bullingham told BBC Radio Four’s Today programme on Monday: “We will do a full review and we will work with the police to catch anyone involved and make sure we can prevent it ever happening again.

“Anyone caught will obviously be banned and have the right action taken against them.”

Bullingham said some “drunken yobs” had tried to force their way in, and added: “We run a stadium, not a fortress. We have got a fantastic security team at the stadium and they had never seen anything like it.”

He apologised to any supporter whose experience had been affected as a result of the security breach.

Videos were posted on social media of people being attacked within the stadium concourses, while away from the stadium there was also disorder in other areas of London.

The Metropolitan Police said there had been 49 arrests connected to the match for a variety of offences. The force also reported 19 officers had been injured as they confronted “volatile” crowds.

Former England rugby international Ugo Monye, who attended the game, told BBC Radio 5 Live: “I was in the queue just trying to get in. You’re so excited, 55 years, you feel fortunate, 65,000 people there, population of 65 million. It’s a privilege, it should have been a celebration.

“But the top and tail last night was just utterly disgraceful. I was stood in the queue and next to me was a father with his two daughters and we were chatting and they couldn’t be more excited.

“But all of that excitement turned. They were frightened. The two girls were cowering, the dad was trying to do everything to protect them as we saw hooligans, thugs, tearing down barriers and just storming Wembley.

“Chucking bottles at police horses, trying to get past, whatever they could, with no care or appreciation for anyone else.”

The scenes of disorder can have done little to aid any UK and Ireland bid for the 2030 World Cup, with a decision on whether to bid for the centenary tournament due to be taken in the first half of 2022.

Monye added: “It’s a privilege to host (the Euros). Six out of seven games at Wembley. Why should we be allowed to host?

“Leaving the stadium with garbage, litter and destruction surrounding Wembley, which flowed into London. Why should we? I’m sad saying that.”