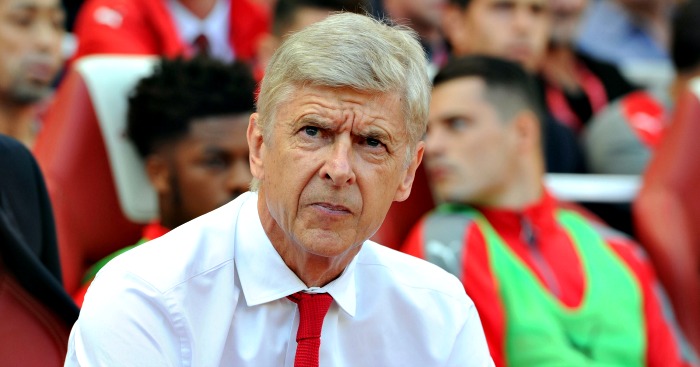 In his post-match interview, Arsenal’s manager claimed that “some players are not ready physically to compete at this level”. This was one of the reasons that a sexy Liverpool gave them a bit of a kicking in the second half.

He offered this up as if it was a reasonable excuse and not something to be thoroughly ashamed of. He certainly didn’t see it as illustrative of his own failings. But surely this is tantamount to telling your customers they’ve paid full price for a defective product? You pay your money to see a team of fit, physically capable men. It’s the least you expect, in fact. But Wenger gave the impression such things were almost a matter of luck.

Surely, one of your main tasks as a coach of an incredibly well-resourced football club, a football club with a lot of money in the bank, is to put together a squad that is physically able to perform for 90 minutes? They might still lose, they might not be good enough, but they should be physically able to compete and you should certainly never be able to say they can’t.

“Not ready to physically compete at this level”. Those are very damning words.

Because frankly, if you’ve got players who can’t physically compete with a man like Philippe Coutinho, who is wonderful to watch, but is surely made out of wet farts and toilet paper, then you’ve got some seriously wimpy players on your hands, Arsene. Why is this the case? Why have you allowed it to be the case?

If they’re not physically up to it, you have quite simply not done your job properly. Why do you even have a first-team squad containing players who are not physically able to compete? Why? It’s all so second rate.

Oh I’m sorry we lost, but some of the players are too weedy. Sorry about that. They just turned up here. I don’t know how. It’s nothing to do with me. Now, can I have my £23,000 for today’s work please?

Maybe Wenger gets away with these hapless excuses because no-one listens to him any more. I mean, why would you? There’s no progress here. Despite being the manager of one of Britain’s greatest clubs it feels like he treats Arsenal like it’s a much smaller club than it is. Can you imagine any major European club manager saying some of his players are not physically able to compete? That would be not just an admission of failure, it’d be a humiliation. Even if it was true, to admit it would be tantamount to handing in your resignation.

Everyone knows when the season starts. It’s not a shock or a surprise, is it? It’s not as if the whole thing was sprung on you. This is your job: prepare the squad. OK, you get injuries (boy, do you ever) but you make sure have plenty of fully fit, physically capable reserves that can compete. You’re a top football club, not a bunch of amateurs scratching around for a few quid. If you can’t put out a side able to physically compete, then have the good grace to refund half of the ticket price to your fans as an apology for failing to do one of the most basic parts of your job.

Wenger of course just looked sorrowful, as though this was a curse over which he had no control. It was quite a pathetic sight really, and spoke to the greater notion that he doesn’t really see Arsenal as a big, powerful force in world football. And as Graeme Souness said, Arsenal moved to a big new modern stadium to play the game on a bigger stage, generate huge income and to become a major player in world football. A major player in world football doesn’t field players not physically able to compete and then offer that up as one reason for their defeat. It all feels very small.

Hang on, the more I think about this, the more outrageous it is. Saying players are not physically capable is not an excuse at all, it’s a cowardly laying off of the blame onto those players that you, you, pal, brought to the first-team squad. It’s all down to you. If they’re not physically capable enough, that’s your fault, the buck stops with you and not with them. It’s not their fault. It’s your fault.

How do you think those players will feel being publicly decried for not being physically capable of playing in a Premier League game? Think it’s going to help them? It’s a kind of emasculation. In your cringing desire to absolve yourself of blame, you have thrown those players under the bus. Well done. Couldn’t you just give them some more pasta, eh?

This is a side that finished second in the Premier League last year, self-evidently, the second-highest position you can achieve. Second should be well-regarded as an achievement, but on the first day of the new season, somehow it feels like that didn’t even happen, or at least that it doesn’t really count, that it wasn’t a well-earned second or was some sort of fluke caused by the failure of others, rather than Arsenal’s quality. It hasn’t even invested Wenger with any capital from his own fans. A team that finished second, roundly booed off after their first home game, even after scoring three goals? Unheard of.

It has to be over.

If Arsenal were managed and run by progressive modern people with a vision, and not old men whose best days are so very obviously in the past, it could be a football behemoth, and not a club that has been so poorly prepared that has had to field players the manager thinks are physically incapable.

A big club would go and get a big new manager. Believe me, you can get a great manager for £23,000 per day.

Arsenal fans: you have the power. Time to use it. And I think most of you know it.