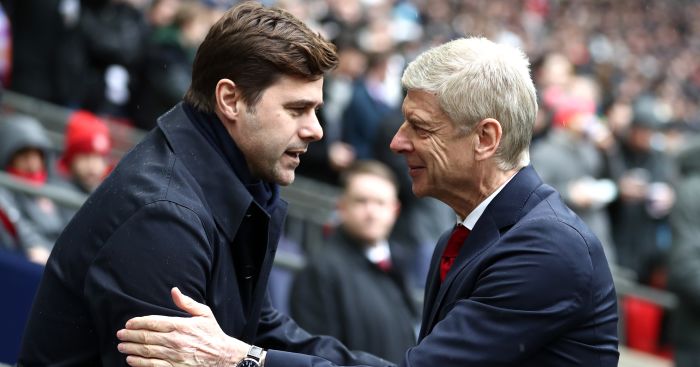 Wenger spent 22 years with the Gunners, winning three Premier League titles and seven FA Cups, but struggled to challenge for the championship during his final years at the club.

Pochettino has done brilliantly to build Spurs into a side consistently challenging for the top four places in the Premier League, while he got them to the Champions League final last term.

However, they have struggled this season with injuries and rumours of unhappy players in the squad, with speculation over the summer that several key stars could leave.

And Wenger sees some parallels between his time at Arsenal and the current situation Pochettino is experiencing at Tottenham.

“I think he [Pochettino] has done very well, what everybody acknowledges,” Wenger told beIN Sport.

“But when he came to Tottenham he slowly built them up with a very young generation. Every year people want something more from you. I experienced that at Arsenal.

“We were 20 consecutive years in the top four but in the end it was not enough. Today, if you get in the Champions League people are very happy.

“That means that happens to Pochettino, once you’re four or five years, somewhere, no matter how good a job you have done, you have to show people you can give more, and he’s at that stage.

“They are a bit destabalised. When I played them two or three years ago they looked like a young, hungry team who had found good strength, good core of the team with people who were growing together, with people who expressed that hunger, and players from outside who were vital like Eriksen.

“Today you don’t feel that exact same chemistry. A player like Eriksen is a bit sidelined because he doesn’t look like he wants to commit to the future of the club.

“Will they get that back? Because if you look at Tottenham in the Premier League they lost 13 games last year but they’ve done extremely well in the Champions League and came close to winning it. It’s down to small margins.

“Your real quality is always where you finish in the table. So the real trend is there.

“They knew and Pochettino knows, he said himself something is not there at the moment. And he will certainly rebuild that. The question we can ask today is it with Eriksen or without?

“I like him [Pochettino] very much because he’s always been quiet, respectful, motivated, worked very well and got a lot of recognition from his own players, that means he’s a quality manager.”