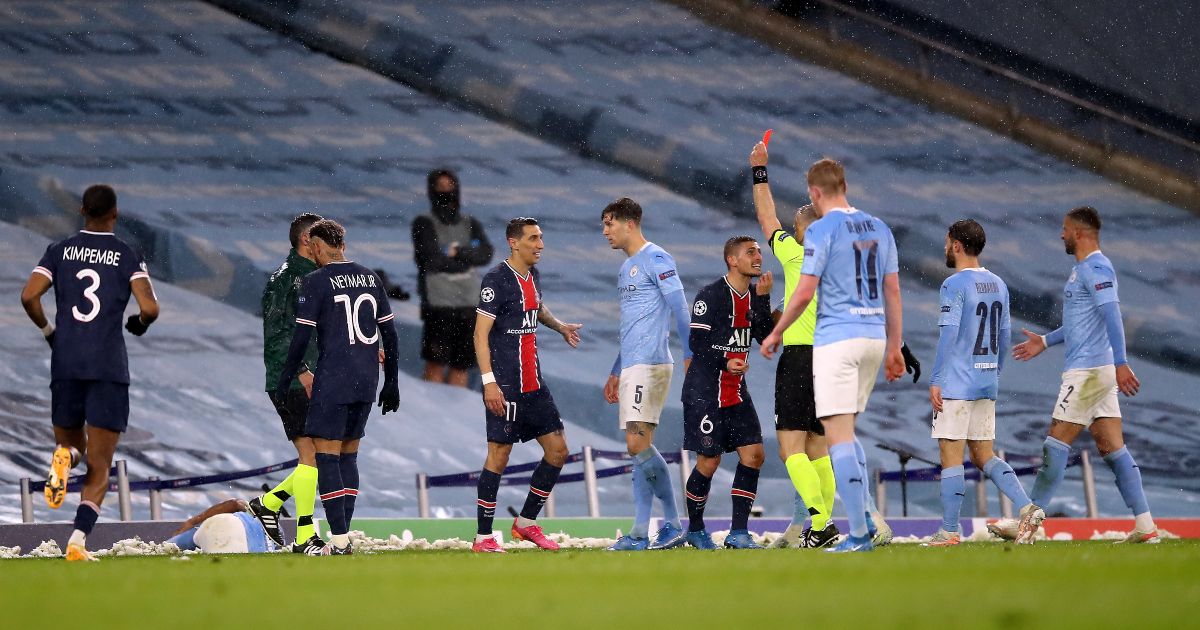 Riyad Mahrez struck in each half as the Premier League leaders beat French champions PSG 2-0 at the Etihad Stadium to complete a 4-1 aggregate success in their semi-final.

Angel di Maria was sent off in the second half or violent conduct as tempers flared with the Argentine clashing with Man City midfielder Fernandinho.

Speaking to beIN Sports, former Arsenal boss Wenger thought Fernandinho should’ve been sent off too, he said: “I have to say I don’t like how Fernandinho behaved tonight. It’s provocative. If you send Di Maria off, you have to send Fernandinho off as well, for me.

“He should already have had a yellow card and then he was provoking Di Maria. They both should have been off.”

PSG threw plenty into attack as they attempted to chase the tie in unexpectedly icy conditions but Mahrez’s second just after the hour proved a killer blow.

“You could say that PSG tonight played well, they showed top quality in some aspects of their game, but they were caught twice by counter-attacks.

“Overall, I would say that for them now it’s important to analyse where they can improve, and it’s at the back. The defence, at the moment, is not good enough to win the Champions League. They have huge potential but that’s where they need to correct it.

“They also need to become more calm and concentrated. We cannot ignore that they finished both games with ten men. So it’s repeated as well. They need to improve their discipline when things don’t go well.”

We did it. 💪🏾 Congratulations to everyone in the club. Let’s keep pushing, there’s a lot of work ahead. What a birthday party I had today. THANK YOU ALL 💙 pic.twitter.com/gV3Lwi8Vtw

Guardiola said: “We beat a team that knocked out Barcelona and Bayern Munich.

“We struggled early on but were much better in the second half. It was an incredible, huge victory for us.

“What the players have done this season is incredible in the toughest year for everyone. Being so close to winning the Premier League and in final of the Champions League is so good.”