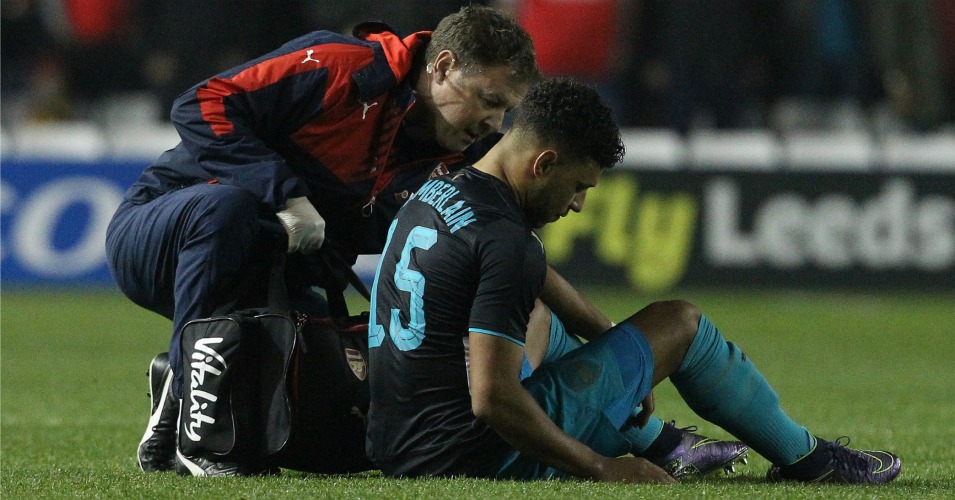 The Gunners were left counting the cost of Tuesday night’s 3-0 Capital One Cup fourth-round loss at Sheffield Wednesday.

Oxlade-Chamberlain was forced off after just five minutes because of a hamstring complaint before Walcott, who came on in his place, also had to be substituted on 19 minutes with a calf injury.

The full extent of both problems is yet to be determined, but Wenger confirmed neither man would feature until after the international break.

Arsenal, who are second in the Barclays Premier League, play at Swansea on Saturday before travelling to Bayern Munich in the Champions League and then hosting north London rivals Tottenham.

“This guy looks like he knows absolutely everything. I am amazed that he knows more than all our physios and all our doctors,” said Wenger.

“I trust my medical staff to do well and my coaching staff to do the fitness planning very well.

“I can only invite you one day to see what work is done behind (the scenes). We have some players who are more injury-prone than others, but we are very well organised on that front.

“We have to analyse every single case and every single exercise, but also I think you have to not over-analyse when players are injured.

“When a player is injured, they are injured, this has always happened.

“We have not too many muscular injuries but it is post-international games we get all these injuries and is it linked with that? I don’t know. What I’m focused on tomorrow is to continue our run (in the Premier League).”

Verheijen worked as an assistant coach for the Holland national team at the World Cup as well as with South Korea and Russia under Guus Hiddink, and joined the Wales national team set-up in February 2011 as assistant to Gary Speed.

In Twitter comments, Verheijen hit out at the “pattern” of Arsenal injuries to players like Ramsey, as well as Robin van Persie and Cesc Fabregas in the past, before pointing to a 10-year UEFA study which reported “football coaches are responsible for most injuries”.

Verheijen, who has a new book called ‘How Simple Can It Be?’, also used media interviews to denounce Wenger’s “old school” training methods, for which he was once heralded as a “revolutionary coach”.

Despite the continued criticism, Wenger insists Arsenal have enough cover.

“It is always disappointing to lose players, but we are equipped, first of all, with the quality of our squad and we are equipped mentally as well ourselves to deal with anything,” said Wenger, who expects Oxlade-Chamberlain to be out for “20 days”, with Walcott “a fraction longer”.

“Before the game against Everton, (Per) Mertesacker was sick and Gabriel came in so we have shown we can deal with that.”

Wenger added: “It is a challenge for me and for the players who come in to show their quality.

“At the end you can find yourself with a bigger squad which is what happened last season with (Francis) Coquelin and (Hector) Bellerin.”

Costa Rica forward Joel Campbell is expected to come into the side on the right wing.

Wenger said: “I have been very impressed with him. His attitude is outstanding. His daily dedication in training and his desire to improve is absolutely outstanding.

“He can be a big help for us, and he can play centre-forward – don’t forget that.

“In the coming two to three months he can be a very important player for us.”

Wenger is expecting a much-improved display from at Hillsborough, where he had made the expected sweeping changes from Arsenal’s regular Premier League line-up.

“We came out of a strong performance against Everton and we know that is what is needed against Swansea,” he said.

“Last year against Swansea they are the only team who have beaten us twice, so we have a good challenge.”