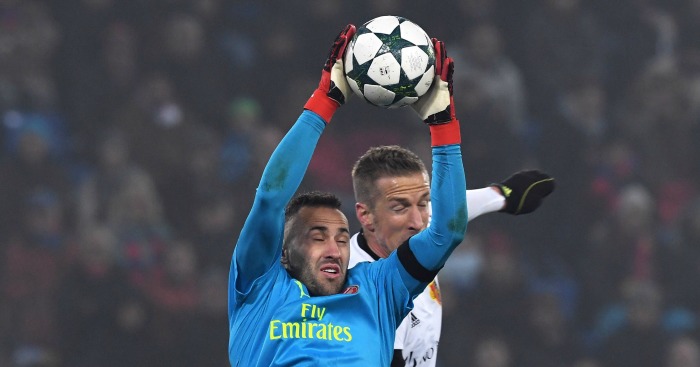 Arsene Wenger will play David Ospina in goal against Bayern Munich on Wednesday night after claiming Arsenal would not be at the Allianz Arena were it not for the goalkeeper’s form earlier in the season.

The Gunners face a tough challenge as they come up against the reigning Bundesliga champions in Germany for the first leg of their round-of-16 tie.

Wenger’s side have been dumped out at this stage of the competition in the previous six seasons, including twice by Bayern, but will be hoping to make use of the small advantage of playing the first leg away from home.

That is reward for topping their group, in which Ospina played all six games as Arsenal remained undefeated against Paris St Germain, Basle and Ludogorets.

And Wenger has kept faith in the Colombia international, opting to field him against Bayern rather than revert back to usual first-choice stopper Petr Cech, as he did at this stage last season against Barcelona.

“I have nothing to hide there, it will be Ospina because of the quality of his performances,” he replied when asked which goalkeeper would start the game.

“We are in the last 16 and finished top of the group. If you analyse his performances in every single game we are where we are because of his great performances.”

Wenger also suggested Mesut Ozil would start on Wednesday after he said the German World Cup winner was lacking confidence in recent games.

Ozil has not scored since December 10 and has been a peripheral figure for many of Arsenal’s last fixtures, including the two recent defeats to Watford and Chelsea.

“I will pick the team tomorrow morning,” he said when asked if Ozil would play.

“I have no doubt that we play in Germany and Ozil is highly focused to have a good performance tomorrow.

“Ozil has been playing for us for many years now and he knows perfectly our team and he knows how we want to play in every match. So it is an important match.”

Wenger admitted to having felt “guilty” in past years when Arsenal were pitched against some of Europe’s elite sides in the past after progressing as group runners-up.

But he also concedes the advantage of having a second leg at home will only come to pass if Arsenal put in a good performance in Munich, having lost 5-1 here in the group stage last season.

“The advantage will be important, to have the second game at home, but only on the condition we have a good performance and result tomorrow night,” he said.

“That is why the only solution is to focus on that. Bayern will have a lot of the ball, but we have to play to be efficient defensively and with a desire to hurt them every time we can.”

Wenger welcomes Granit Xhaka back into his squad after the midfielder sat out the last four domestic games through suspension, while Per Mertesacker also makes a Champions League squad for the first time this season.

Lucas Perez was left in England due to a slight hamstring problem, with Aaron Ramsey and Santi Cazorla the other injured players.