Home All The News Wenger: Every time Morata goes down it’s a f***ing FK 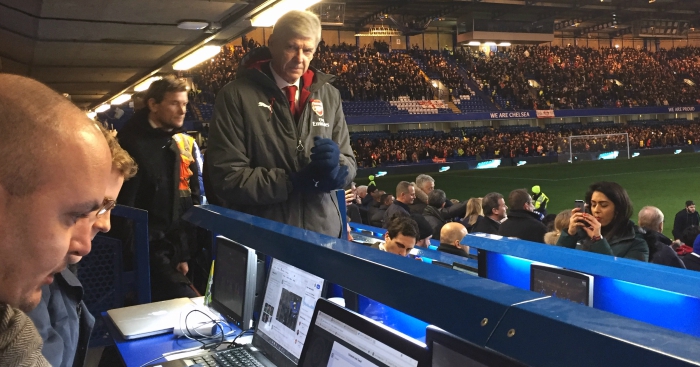 Arsene Wenger questioned how many free-kicks Alvaro Morata wins while sat in the Chelsea press box on Wednesday.

Wenger was serving the second of a three-game touchline ban, and was made to sit in the stands at Stamford Bridge.

The Frenchman was placed in the press box, surrounded by assorted journalists, throughout the Carabao Cup semi-final first-leg stalemate.

The game was a low-key affair, characterised by more missed chances for Chelsea, as in their 2-2 Premier League draw earlier this month.

Morata was once more guilty of missing opportunities, but Wenger was more eager to point out his propensity for winning cheap free-kicks.

Sami Mokbel of the Daily Mail provided an insight into Wenger’s thoughts and actions throughout the match, and says the manager was overheard swearing at the Spaniard in the second half.

“Every time he [Alvaro Morata] goes down it’s a f***ing free-kick,” he is claimed to have said.

Morata had three shots at Stamford Bridge, but failed to score for the fourth game running. When do Chelsea start to worry?