Home Arsenal Wenger gets away with merde in France 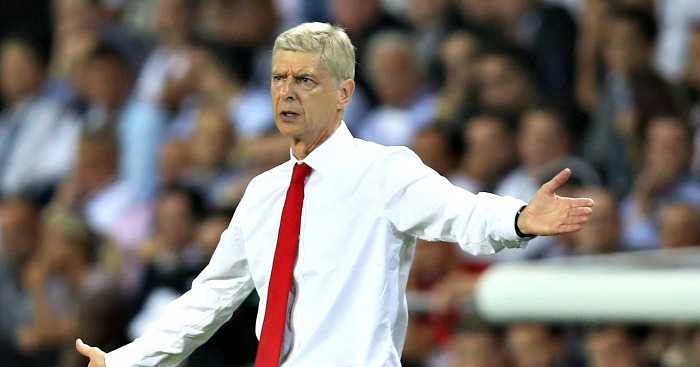 “They need to get players in behind. Coquelin is the one making those runs.”

It was at that stage, five minutes into the second half of Arsenal’s draw with Paris Saint-Germain, that the game descended into surrealism.

You could sense the exasperation in Owen Hargreaves’ voice. Arsenal had spent £96million in the summer – their largest expenditure in any single transfer window in their history. Yet almost £50m of that remained on the bench for the majority of their opening game of this Champions League campaign.

“I don’t want to surprise,” Arsene Wenger told BT Sport before the game when asked of his starting line-up. “I just want to play a team who can perform tonight. We’ve made some changes to stop them.”

To the Frenchman’s credit, Arsenal did stop them – for 43 seconds. Within a minute of kick-off, Serge Aurier had raced down a right flank which he would dominate throughout the game. He proceeded to cross for Edinson Cavani, who was celebrating his goal long before David Ospina had even realised he had been chosen to start over Petr Cech.

The decision to trust the Colombian in such a pressurised match was the one which drew the most consternation from Arsenal fans pre-match, yet it turned out to be the most justified call in Wenger’s starting line-up. The second-choice goalkeeper made four vital saves, first to keep the Gunners in the game, then to preserve a draw. The only man Wenger owed a bigger debt of gratitude to at the final whistle was Cavani.

Arsenal would undoubtedly had taken a point from the perennial French champions if offered before the game. That Alexis Sanchez’s late equaliser at the Parc des Princes delivered precisely that should not mask the errors made by the manager. This was a game made for a combative, disciplined midfielder – a Granit Xhaka. This was a tie built for a positionally aware focal point to lead the line – an Olivier Giroud. This was an eminently beatable PSG side made to look almost unstoppable. Were it not for the wastefulness of Cavani, Sanchez’s strike would have been a mere consolation.

The Gunners deserve credit for securing a draw in difficult circumstances against tough opposition, but not Wenger. Coquelin did not decide the tactics which dictated he would be the club’s main point of attack; Wenger did. Sanchez did not start himself as a lone striker, despite the growing body of evidence that he simply cannot fulfil such a role; Wenger did. Santi Cazorla did not choose to combat three PSG central midfielders alone; Wenger asked him to. The Frenchman must accept the blame for starting a woefully out-of-form Alex Oxlade-Chamberlain and an Alex Iwobi recently returning from injury. He must face questioning for not starting his best midfielder in midfield for their most important game of this nascent season.

“We have a big first test tonight,” Wenger said pre-match. “Let’s do well in this test.” The players passed, albeit barely. The manager failed

“Every game you have to be at your best,” he added. But how could Arsenal be at their best when this was not their best side? Credit to the players for forcing a draw, but the manager got away with merde in France.