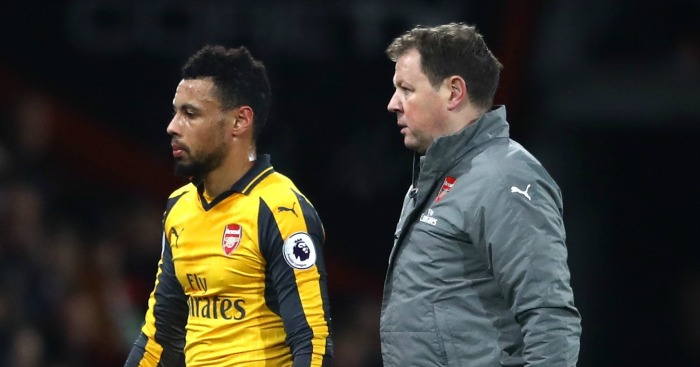 Arsenal have a central midfield crisis with Francis Coquelin ruled out for up to four weeks, Santi Cazorla’s recovery delayed and Mo Elneny at the Africa Cup of Nations.

The Gunners will be forced to partner Granit Xhaka and Aaron Ramsey, a combination that did not look promising against Bournemouth on Tuesday.

“Coquelin is out for three to four weeks with a hamstring problem. He has a scan today,” said Wenger on Thursday ahead of the FA Cup clash with Preston.

He also said that Cazorla’s recovery from ankle surgery is “not going as quickly as I imagined it”; his absence has been keenly felt.

Mesut Ozil is set to be assessed by a doctor after a throat infection but is not expected to face Preston, while Alexis Sanchez, Lauremt Koscielny and Petr Cech will also be rested.

Danny Welbeck could make his first senior Arsenal appearance of the season, but it depends on the fitness of Lucas Perez.

“I have not decided yet whether Welbeck will play against Preston. His fitness is at a good level but we want to give him a few games with the Under-23s first.

“It also depends on Lucas Perez’s situation as well – he has an ankle injury.

“Coming back, Walcott is closest but not ready.”