Home All The News Wenger: ‘I have two world-class keepers’ (we count zero) 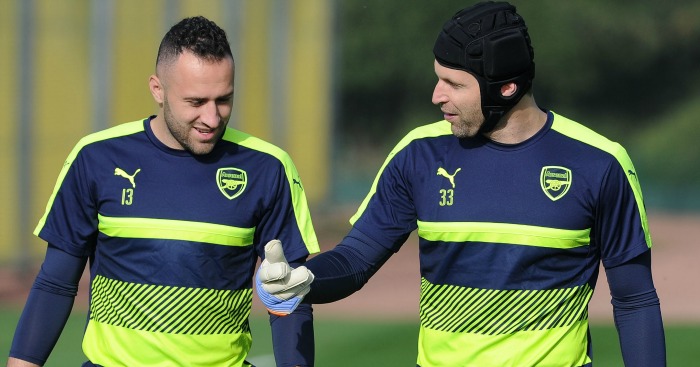 Arsene Wenger has confirmed David Ospina will start in Sunday’s Carabao Cup final and has paved the way for the Colombian goalkeeper to feature throughout the Europa League campaign.

Ospina captained the Gunners to a comfortable 3-0 win over Ostersund last week and will retain his place when the Allsvenska outfit visit the Emirates Stadium this Thursday, with the hosts looking to ease into the last 16 of the Europa League.

Petr Cech, Arsenal’s usual first choice, suggested earlier this week that he will sit out the Carabao Cup final as Ospina lines up against Manchester City.

Ospina has played in all but one round to get Arsenal to the final, with Matt Macey deputising in the narrow extra-time victory over Norwich.

Wenger set clearly defined roles for his keepers this season and, when asked if Ospina would play on Thursday, he replied “yes” before going on to confirm he would then remain in goal for the cup final.

“It’s always a difficult decision but I think they are clear about that,” he said about his goalkeeping selection.

“Since the start of the season, it’s clear. He (Ospina) played in the whole competition. I have two world-class goalkeepers and I decided from the start to have clarity in the games they play. I maintain that.”

While Ospina’s place at Wembley is confirmed, Wenger will still be sweating over the fitness of Aaron Ramsey.

The midfielder trained with his team-mates on Wednesday morning but a groin injury means he will not feature against Ostersund and is still a doubt for the meeting with Manchester City.

“He’s not in the squad tomorrow,” Wenger confirmed when asked about Ramsey’s availability.

“He had a good training session but he’s a bit short for tomorrow. We’ll see how his evolution goes now from today until Sunday.

“I don’t rule him out yet, it depends on how well he can improve with the intensity of training until Sunday.”

Henrikh Mkhitaryan will start on Thursday as he is ineligible for the cup final, having played for Manchester United earlier in the competition.

Surprisingly, Mesut Ozil played the whole 90 minutes of the opening leg against Ostersund in sub-zero conditions.

He will be absent this time around due to illness, although Wenger believes he will be fine to feature in the final.

“Mesut was sick,” he added.

“Today was his first training session. He was in bed on Monday and Tuesday with sickness. I would certainly have played him but he was sick.

“He will have to work hard and he will not be involved tomorrow. He should be OK for Sunday.”