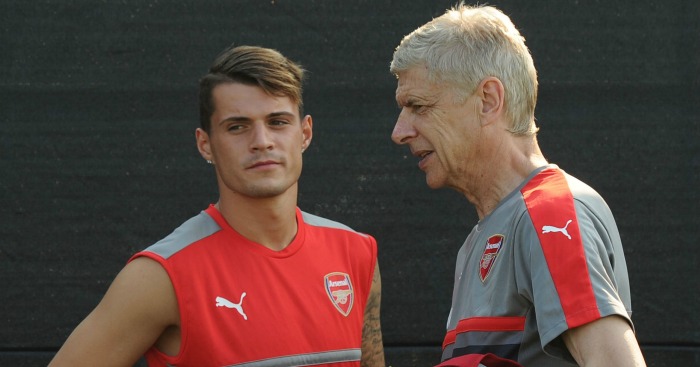 Xhaka, 24, moved to the Emirates Stadium earlier in the summer for a fee believed to be in the region of £30million.

The Switzerland international made his first start in the goalless draw at Leicester but shone as the Gunners beat Watford 3-1 at Vicarage Road.

While Santi Cazorla, Alexis Sanchez and Mesut Ozil got the goals in what was a clinical first half for Wenger’s side, Xhaka was assured and confident in possession.

The former Borussia Monchengladbach captain is not afraid of a tackle and is happy to sit in front of the back four to allow Arsenal’s flair players to express themselves.

Wenger, who has confirmed Valencia defender Shkodran Mustafi and Deportivo La Caruna striker Lucas Perez will join in the coming days, likened Xhaka to former Arsenal favourite Petit and revealed the club had made a move for him last year.

“We tried already in December last year,” Wenger replied when asked when he decided he wanted to sign Xhaka.

“He has a good engine, good stature, he is good in the air and has a good balance in his game, he has a good short ball and a good long ball.

“He is 24 years old, he has already experience abroad and that is always a problem and is more reassuring when a player has already played abroad somewhere.

“He was captain at his age at Monchengladbach, that is not a small club so he has leadership qualities.

“He is a guy who plays naturally behind the ball, he is a bit similar to (Manu) Petit in the way he plays football. He likes to sit, give good long balls and be available with the centre-backs.”

Xhaka’s use of the ball was fantastic as Arsenal ran roughshod over the Watford defence, losing their clean sheet only when debutant Roberto Pereyra curled home after the ball had been bouncing around in the visitors’ box.

“I believe he has a good mixture of short and long balls, in midfield it is important for us to sometimes stretch the defenders,” Wenger continued.

“We have a game that is based on shorter passes than other teams so sometimes you have a player who can kick the longer ball gives us a chance to get some oxygen and some space. He has a big focus and I think he is mentally strong.”