Home Arsenal Wenger on Adams: ‘It’s a subject of no interest’ 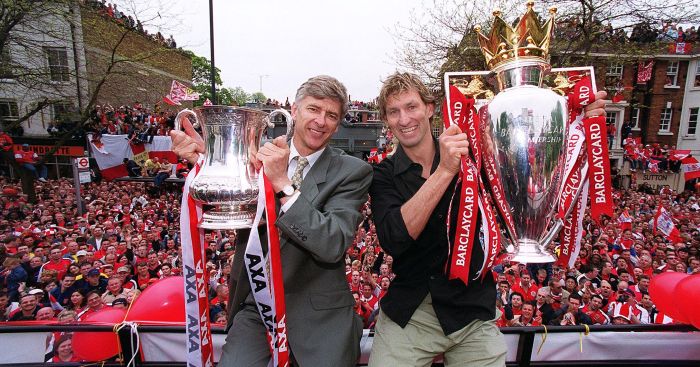 Arsene Wenger believes it is “sad” that his former Arsenal captain Tony Adams has criticised him in his new autobiography.

The Gunners boss has come in for stinging condemnation from a host of his ex-players following a poor season and has yet to publicly announce if he will remain at the helm beyond next month.

Arsenal were in the title race until the turn of the year when a dreadful run of form saw them drop off the pace to such an extent that they head into the final round of Premier League matches needing a win to keep alive their hopes of a top-four finish.

Victory over Everton may still not be enough to ensure Champions League football as they also require either Liverpool or Manchester City to slip up in their own games.

Combined with a humiliating 10-2 aggregate defeat to Bayern Munich in this season’s Champions League, reaching the FA Cup final for the third time in four years has not been enough to stop Wenger facing a barrage of criticism.

As well as a number of vocal fans protesting for Wenger to leave this summer rather than sign a fresh deal when his current one expires, ex-players such as Ian Wright, Paul Merson, Lee Dixon, Martin Keown and Thierry Henry have spoken disapprovingly about their former boss.

Now Adams has added his name to that list after the current Granada boss questioned Wenger’s coaching ability in his forthcoming autobiography.

Speaking in his autobiography “Sober”, serialised in the Sun, he said: “Arsene is essentially not a coach – and that is the second reason why I believe he didn’t want me. Back in the day I said in an interview coaching wasn’t Arsene’s strong point.

“Actually in the original draft, I said he couldn’t coach his way out of a paper bag. And though I modified that in the final article, it didn’t go down well.

“It all left me feeling that I would never get a chance in any capacity while Arsene was there.

“Much as I respected him for his long and successful tenure, my occasional willingness to pass comment on him and the team probably counted against me.”

Wenger, who had Adams working at Arsenal in the youth set-up for a short spell last year, said the remarks did not cause him pain and said he would rather focus his energies elsewhere.

Asked if he had been hurt by Adams, he said:” “No.

“He can show what he can do now. Who gives importance to that? I know him for a long time. It’s sad.

“I am respectful to everybody. I don’t have anything to say about that. For me it’s a subject of no interest. And so I would like to dedicate my time to something that is more interesting.”

Adams won four league titles and three FA Cups during a 19-year career at Arsenal but has struggled since trying to make it as a manager.

After disappointing spells at Wycombe, Portsmouth and Azeri side Gabala he is now in charge of Granada.

The club looked destined for the drop when he took over and their relegation from LaLiga has since been confirmed with Adams losing all of his games.

If he does depart Spain this summer, his comments on Wenger may mean there is no chance of a return to Arsenal – where a number of their former players work.

Adams’ former central defensive partner Steve Bould is Wenger’s assistant while the likes of Henry, Freddie Ljungberg and Robert Pires have all recently worked in the academy.

But Wenger insists just because a player forged a career at Arsenal does not mean the club owe them a coaching role after retirement.

“Look, in a football club today, you have to employ people who can help you to be successful,” he said.

“Sometimes it is to make harsh decisions.

“You have to be needed. And like you have made a career as a player somewhere, it doesn’t give you any divine right to come back. That’s what it is.

With Wenger’s future still uncertain, Sunday’s visit of Everton could yet prove to be his last-ever game in charge of Arsenal at the Emirates Stadium.

But the 67-year-old is more focused on beating the Toffees than on his own situation – highlighting his point by having one final dig at Adams.

“What is most important for me is to do the job well and finish the season as strongly as we can,” he said.

“If we finish the job well, it can be maximum one point short. I’m not here for personal glory or to sell books, I’m here to do the job.”