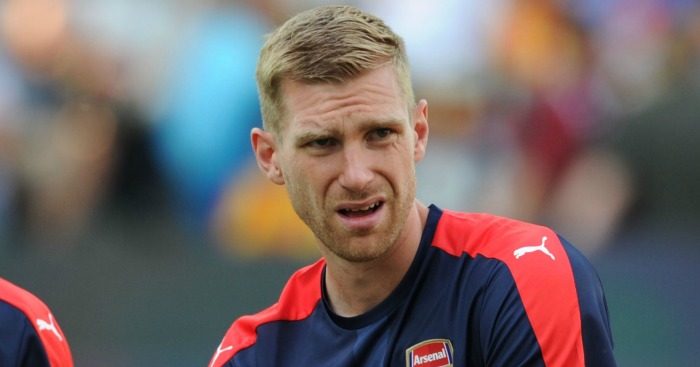 Arsene Wenger has confirmed that Per Mertesacker will be out until 2017.

Mertesacker suffered a knee injury against Lens, and has now had surgery.

Initial reports suggested that the defender would be out for between four and five months, and Wenger confirmed that prognosis.

Arsenal’s manager also suggested that the club’s young players could cover for Mertesacker, despite reports linking the club with Valencia’s Shkodran Mustafi, before saying that he was in the market for an experienced defender.

“We have three young players who compete for the position; Holding, who has been very impressive, Bielik and Chambers,” said Wenger.

“I will have to make a decision on who is the closest to that position.

“I had Per on the phone two days after his surgery. He is highly motivated to come back strongly. He will be out for a few months. Is it three or four? I don’t know. Certainly I don’t count that Per will be back before the end of the year.

“We will miss him. He is a leader on and off the pitch. He is very well respected in the dressing room and gets everybody focused on targets. We lose a heavyweight in our dressing room.

“Do I think we will sign an experienced central defender before the season starts? Yes, I do.”

Thanks for all the get well soon messages. Doc said he built in a 20 goals guarantee. No striker rumours anymore 🙂 pic.twitter.com/yC1tdDCI6h