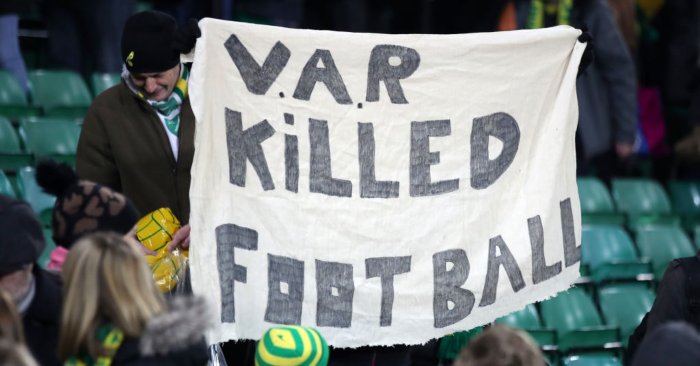 Just for a day, I’d like to see Arsene Wenger’s offside revolution come to fruition.

“There is room to change the rule and not say that a part of a player’s nose is offside, so you are offside because you can score with that. Instead, you will be not be offside if any part of the body that can score a goal is in line with the last defender, even if other parts of the attacker’s body are in front.

“That will sort it out and you will no longer have decisions about millimetres and a fraction of the attacker being in front of the defensive line.”

Wenger’s proposal to change the offside law will be tabled when the International Football Association Board convenes on February 29 and, if adopted, could be in place in time for Euro 2020. Theoretically, at least, because enforcing that kind of change on the game ahead of a major tournament is asking for trouble – and continent-wide condemnation.

Still, it would be briefly worth pushing through the change for the resulting chaos. And maybe for the righteous comeuppance it would force upon habitually negative managers.

Imagine that. Sean Dyche left livid because a forward has defeated his carefully planned offside trap with a trailing toenail; Jose Mourinho incandescent because a flapping ponytail has spoiled a goalless draw.

Wenger is being serious, of course, but this initiative could easily be interpreted as his revenge on everything and everyone he resented. In fact, you could imagine him sitting in a coffee house in Zurich, roll-neck sweater on, kale smoothie on its way, laughing over his ultimate victory and the annihilation of the fatal weakness which undermined so many of his teams.

It would breed some silly games. Some very entertaining Match of the Day episodes. And, most likely, would cause the spontaneous combustion of a couple of people who are widely disliked.

After that? Beyond the novelty, the reality would set in: moving the offside line might affect the aesthetic, but not actually the mechanic – in fact, it would just invert the problem. The frustration would still be there, just towards something which looked slightly different. It’s the same issue, represented in a different way.

That’s because VAR is not really about lines on a screen. Nor does it really matter what they’re measuring. The important detail is that they’re there at all and what that, as a symbol, represents.

It says that the sport is willing to be pedantic in its pursuit of accuracy. There is no inherent problem with the current offside law, only with the way it’s being measured. If football is determined to be a millimetre-by-millimetre business, then that law could be adjusted in any way imaginable, but always with the same effect.

The only real difference would be illusory. Because more goals would be allowed than disallowed, it would create the perception that VAR was giving rather than taking away. It would be charitable rather than punitive. The generous aunt rather than the miserly uncle. For all intents and purposes, though, the fundamental relationship with the sport would be the same.

In time, so would the grievances. There have already been dozens of VAR-informed offside decisions this season, many goals have been ruled out and, in response, the ‘it’s not football anymore’ chants and its variations are sung on a weekly basis. But games would still be lost by those invisible increments and the intrusion into and the obstruction of the sport’s fluency would be the same. The microscope would just be pointing in another direction, attempting to find another margin which would otherwise be invisible to the naked eye.

The game would still stop and we would all still be left shifting in our seats while it did. VAR is an attitude that the game has decided to adopt. What it is actually used for is really irrelevant.

It’s the kind of solution Arsene Wenger would be expected to propose. It caters to his belief system perfectly. But while it seems more noble – and more attractive as a result of what it appears to encourage – the challenge to the spirit of the game would be identical.

It would still be fingernails, armpits and kneecaps. In other words, it still wouldn’t be football.