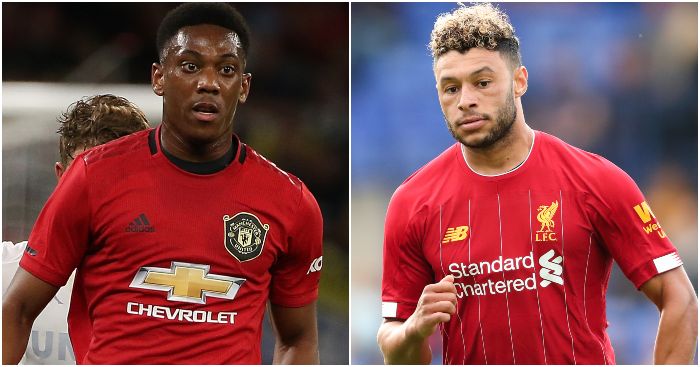 Alex Oxlade-Chamberlain
What is this list? Let’s be honest, it’s a bit of a tenuous concept – players who might be better than they are and who could yet climb higher in public perception. And Oxlade-Chamberlain belongs somewhere within that conversation.

Mainly because we’ve only ever really seen his ability in short, enticing bursts, and never over a concentrated period of time.

Part of the reason for that is injury, of course. When he joined Liverpool, there was definitely a sense that he was finally in the right place. Oxlade-Chamberlain is technically gifted, but he’s also a very vertical and forceful player who, under the right conditions, could be among the most dynamic in the league.

Jurgen Klopp was his ticket towards becoming that player full-time. Unfortunately, just at the point where that evolution was beginning, Oxlade-Chamberlain succumbed to an injury from which he’s still recovering.

Long-term recoveries don’t end when a player steps back onto the pitch. We understand that and realise that his Liverpool career won’t just pick up from where it paused. Most likely, he’ll be all clunky touches and hesitancy for a while, but what could he be after that reticence melts away?

A thrusting, purposeful midfielder capable of knifing into the fractures created by the division’s most incendiary forward line. It’s a thrilling prospect.

Krystian Bielik
Are Arsenal missing a trick here? The Polish press is currently reporting that Bielik will be leaving the club in the near future and, given that the centre-half spent last season on-loan in League One, that isn’t much of a surprise.

But remove Bielik from that context and view him for what he is – a fine ball-player who plays the position in a modern, progressive way – and it’s hard to resist the conclusion that he’s at least viable in the Premier League. Certainly on the basis of his performances in the recent European u21 Championship, where he was among the best defenders in the competition.

That, too, comes with caveats: age-group football is the ultimate false economy. Nevertheless, he does exhibit the tenets of something promising. Especially with Shkrodan Mustafi already in mid-season comedic form and Laurent Koscielny having torched his bridges to ash.

Bielik isn’t a hill to die on, but Arsenal’s lack of interest in him is still baffling.

Lys Mousset
If the reports are true, he’ll be Sheffield United’s Lys Mousset soon enough and for a not insubstantial £10m. Hefty, particularly for a player with three Premier League goals in nearly 60 appearances.

But there’s something about Mousset. It’s an aesthetic which probably doesn’t bear out in any scouting reporting or analytics models – if some numbers-type has done a ‘radar’ for him, it’s likely the size of a hula-hoop – but there’s a sleekness to his game which means that, if you squint, you can imagine growing into something worth paying attention to. It shows in his touches of the ball and the smooth, languid way he receives it. It’s a seductive optic.

Those appearance statistics also comprise just 1200 league minutes in three years, which is the equivalent of just over three 90-minutes games a season. There’s certainly experience to gain and potential to grow into.

Maybe he never suited life at Bournemouth? It might be an instance of a club scouting a good player, but one who wasn’t quite right for them. Eddie Howe’s forwards all share counter-attacking properties that Mousset doesn’t obviously possess and the chances of him displacing Callum Wilson have always been remote.

But at Chris Wilder’s Sheffield United, where Billy Sharp’s Indian Summer is predicated on a more traditional set of centre-forward attributes? Mousset isn’t an orthodox No.9, but he’ll get chances if he moves to Bramall Lane and at least the opportunity to properly define himself.

He has something. We’re not quite sure what, but it’s a dull glint which just needs a bit of a polish.

Anthony Martial
Nothing sums up Manchester United’s current ownership better than Joel Glazer’s apparent belief that Martial is the club’s Pele. It’s so descriptive: Glazer has heard of Pele, knows that he was a forward who scored goals, and has drawn a straight line to a player who bears no relation to him at all.

It’s football, as understood by people who don’t really like it.

Anyway, there’s nothing original about Martial’s appearance here: he’s an obviously under-realised asset and arguably the pre-eminent victim of what United have become. He’s not without responsibility for that, either. He’s still prone to receiving the ball at a stop and his failure to seize a full time position is partly responsible for his failure to develop.

But while maybe nothing more than pre-season spin, Ole Gunnar Solskjaer is reporting some encouraging signs.

“Anthony can be a world class forward. I think if you followed Anthony the way he has come back to pre-season, his attitude is spot on. I think he has always got the quality and talent, so I expect him, and Marcus, to be even better than last season. Anthony had a top season when he came, I expect we will see a better Anthony next season.”

The chances are that Martial has appeared in this kind of list every year since he arrived. Most likely, he’ll be back again in twelve months’ time. But his talent is so teasing and so obviously there in abundance, that he has to be included until one of two things happens: either an entire continent of scouts and experts are proven conclusively wrong about him or, more likely, he goes supernova.

Please, just for the sake of satisfying a curiosity, let it be the latter.

Mason Mount
Often, Mount is presented as just another member of a talented generation. As an example of what England have been doing right, as evidence of the Chelsea academy’s fertility.

He’s both of those things, clearly, but he deserves his own separate billing. The bulk of attention will generally flow towards players with a more exhilarating exterior and, when that encases the talent of Callum Hudson-Odoi or Jadon Sancho, that’s hard to argue with.

By comparison,Mount is a softer sell, but he’s equally if not more interesting because of how complete a player he is. Having signed a new contract earlier in the week, the hope now is that he remains at Chelsea this season and, under a coach who has already shown significant trust in him, gets a proper opportunity to make a home in their midfield.

And why shouldn’t he? Mount is an incredibly gifted player, a schemer who sees space really well and whose first instinct is to move the ball forward. In short, in this post-Eden Hazard world, with Chelsea under a transfer-ban until 2020, they couldn’t have happened upon a more ideal player to help cure their midfield stasis.

Noting his talent isn’t revelatory, but perhaps there’s a general blindness as to how good he can be. If Frank Lampard sets him within a midfield fortified by N’Golo Kante and creates the conditions for him to be truly expressive, he’ll be playing for England before the end of the year. Mount isn’t good, he’s special.

James Ward-Prowse
A cheat entry, perhaps, because the reclamation of Ward-Prowse’s career has already begun. 2018-19 didn’t quite end with England cap for him, but it probably deserved to, such was his improvement under Ralph Hasenhuttl.

It was a six-month burst of form which corrected the perception of a player who, for all intents and purposes, had been disregarded. In the post-Ronald Koeman years at Southampton, he become an afterthought: a neat player good for set-piece delivery and the occasional nice pass, but not someone who could ever control a game or upon whose back Southampton were ever likely to rise.

Whether that becomes the case remains to be seen, but there’s a growing bank of evidence to suggest that Ward-Prowse is ready to move in from the periphery. He’s now a much harder working player and he exhibits a determination to be involved in as many phases of the game as possible. He’ll never be what he was expected to become – a kind of home counties David Beckham – but if the club’s improvement under Hasenhuttl continues and Ward-Prowse new, more forceful persona continues to develop, all of that technique may yet be backed by something real and significant.