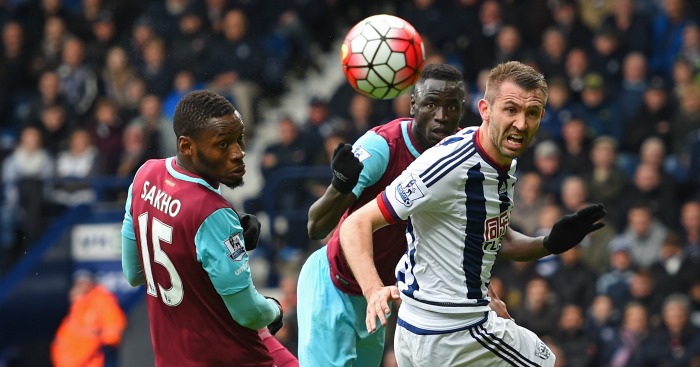 West Ham sent out a European warning as they powered into fifth with an impressive win at West Brom.

Mark Noble’s double and Cheikhou Kouyate’s strike gave the Hammers a 3-0 victory which sent them above Manchester United on goal difference in the Barclays Premier League.

United will retake fifth spot if they avoid defeat against champions-elect Leicester on Sunday but the Hammers kept up the pressure and they have lost just once in their last 13 games in all competitions.

They face United in their final game at Upton Park on May 10 in what is set to become a winner-takes-all clash.

Craig Gardner wasted three early chances for the mid-table Baggies but they were blown away once Kouyate had opened the scoring in the first half.

Jonathan Leko was handed his full debut by the hosts and became the first player born in 1999 to start a Barclays Premier League game.

The 17-year-old was the brightest spark during a scrapping opening which did little for the imagination, until Adrian saved from Craig Gardner on 10 minutes following Leko’s jinking run.

The Hammers keeper then denied Gardner again when his defence failed to deal with Salomon Rondon’s burst before the midfielder tamely planted a header wide when well placed.

Slowly, the Baggies ran out of stream and Diafra Sakho was inches away from connecting with Aaron Cresswell’s cross as the Hammers began to assert their authority after the hosts’ brash start.

Dimitri Payet became more influential and it was the France international who eventually unlocked Albion to help the Hammers open the scoring after 34 minutes.

The hosts struggled to clear from a West Ham corner and when a fortunate ricochet broke for Payet he found Kouyate to head in at the far post.

It underlined the Hammers’ extra cutting edge and they doubled their lead in first-half injury time as the hosts were caught cold again.

Kouyate was sent scampering down the left and raced unchallenged into the area to tee up Noble, whose survived a poor first touch to stab in the corner.

It was another sloppy goal for the Baggies to concede as they were left to rue Gardner’s early misses with the Hammers increasingly comfortable.

Slaven Bilic’s side had more quality, the gulf highlighted by Rondon’s weak header being easily gathered by Adrian, before Saido Berahino missed a glorious chance after 64 minutes.

The striker had only been on the pitch for less than 90 seconds when Rondon cushioned a cross into his path but he could only drag an effort inches wide from 15 yards.

Fellow substitute Sandro shot wide but the game drifted, playing into West Ham’s hands as they batted any limp attacks from the hosts.

And they wrapped up victory with 11 minutes left when Noble bagged his second.

Payet was allowed the chance to run at the Baggies defence and tee up Carroll to cross for Noble to adjust his body and smash a 10-yard volley into the roof of the net.