Home Arsenal Arteta ‘so happy’ with Arsenal ‘eventually coming together’ 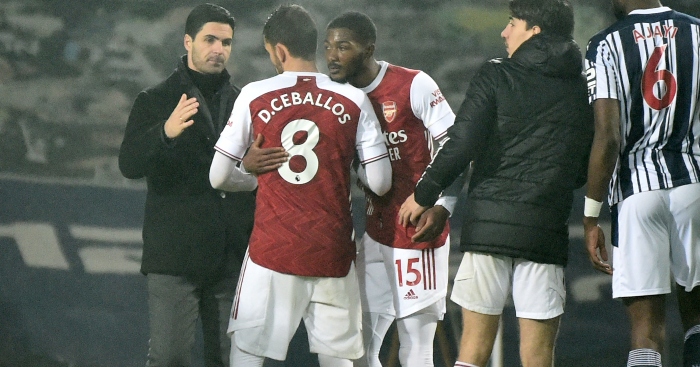 Mikel Arteta revelled in Arsenal’s third straight win after West Brom were brushed aside in the snow at The Hawthorns.

After a wretched run of seven without a win, the Gunners have now triumphed three times since Boxing Day, with Sam Allardyce’s Baggies no match for Arteta’s side.

Kieran Tierney scored a fine solo goal before Bukayo Saka rounded off a delightful move to give the Gunners a commanding half-time lead.

Alexandre Lacazette then scored twice in the second half as Arteta’s side cruised to victory.

“It was a convincing win, and to win three games over the festive period in the Premier League is not easy,” Arteta told BT Sport.

“The first goal with Kieran was terrific and the second goal with the combination between players was fantastic as well.

“The clean sheet, our second in a row, gives us a platform to go on and win the games and we looked more creative in the final third.

“I am so happy because the table looks completely different, the energy around the place is much better, wins bring confidence, and you can see that in the way the team played today.”

Tierney believes Arsenal are getting their reward for hard graft on the training ground under Arteta’s tutelage.

“We want to build up points, climb up the table and the last few games we have done that,” Tierney told BT Sport.

“We have worked hard every day, and it is eventually coming together now.”

On his first-half solo effort, the Scot added: “The boys are calling it a cross.

“I don’t score many so I am delighted with the goal.”