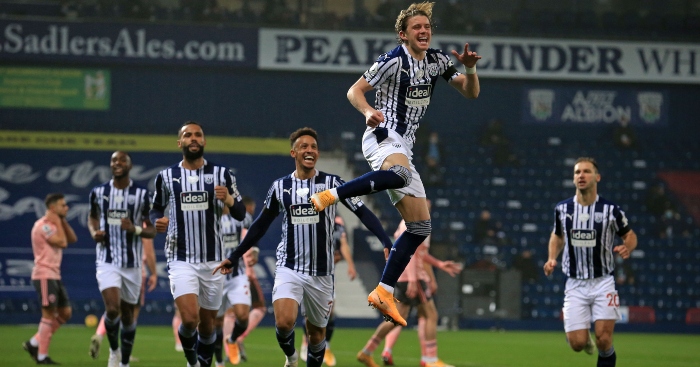 Conor Gallagher’s first-half strike saw West Brom gain their first Premier League win of the season and left Sheffield United rooted to the bottom of the table still searching for theirs.

Both Slaven Bilic and Chris Wilder would have circled this fixture as an opportunity to finally kick-start their campaigns, and it was Baggies boss Bilic who was celebrating after Gallagher’s 13th-minute goal was enough for a 1-0 victory.

In truth, though, the Blades created enough clear-cut chances to win the game comfortably and their manager Wilder will be left wondering how his team finished empty-handed once more.

The Blades began brightly and should have been ahead inside the opening minute through Oliver Burke. The 23-year-old, against his former club, did well to control the ball on his chest but lost his balance as he shaped to shoot, scuffing his effort straight at Sam Johnstone.

Wilder’s side were dominant and John Fleck sent a shot whistling past the post before another gilt-edged chance passed the Blades by after five minutes. Burke did brilliantly to get to the byline before cutting the ball back for George Baldock on the six-yard line but his shot was cleared off the line by Gallagher.

The hosts rode the early wave of pressure and found a foothold in the match, focusing much of their play through Matheus Pereira in midfield.

Gallagher strikes a sweet effort from the edge of the box which nestles in the bottom corner! 🎯

One such move through the Brazilian resulted in a corner which brought the opening goal. Pereira took the set-piece, which was scuffed away from the near post by Sander Berge into the path of Gallagher, and he struck a sweet volley from the edge of the area which flew through a crowd of players and into the bottom corner of the net.

A fine save from Johnstone to deny Burke once more immediately preserved Albion’s lead as he athletically tipped the Scot’s flick goalwards from Kean Bryan’s cross over the crossbar.

West Brom were looking dangerous now, with Pereira pulling the strings. Aaron Ramsdale made himself big to deny Karlan Grant from close range just after the half-hour mark.

Pereira had Ramsdale scrambling across his goal when his 20-yard strike flew narrowly wide.

The Blades were still creating good chances, though, and Oli McBurnie should have done better than plant his header straight into the arms of Johnstone.

The visitors survived an early spell of second-half pressure, which included four corners, thanks to a fine save from Ramsdale to keep out Kyle Bartley’s header from a corner. Pereira then almost found the top corner with a deft little flick from a free-kick.

Another glaring opportunity was missed by Wilder’s men just after the hour. Some lovely link-up play between McBurnie and Burke teed up Baldock 10 yards out but, with the goal at his mercy, the full-back blasted the ball wide, leaving his manager wincing on the sidelines.

The chances kept coming for the Blades, but time after time they failed to take them. A brilliant move involving John Lundstram and Berge saw McBurnie get on the end of a near-post cross and force Johnstone into a fine block.

McBurnie should have got his name on the score sheet for the first time this season with 10 minutes remaining but, from just inside the area, the Scot lacked conviction in his finish and almost telegraphed his shot, making the save easy for Johnstone.

At the other end, the Baggies nearly made sure of the victory after 85 minutes on the break through Hal Robson-Kanu, but Ramsdale made a solid save to keep his team in the game.

Wilder was left frustrated once more in injury time as Johnstone made a double save to deny Rhian Brewster and Baldock, before Lys Mousset, described as a game-changer by Wilder in the build-up to the match on his long-awaited return from injury, somehow scooped the ball over the crossbar from two yards out.

It was the final chance for the visitors, who are on a five-match losing run in the Premier League and without a win in 13 games going back to last season. West Brom, however, moved out of the bottom three with their first league success of the campaign.

conor gallagher
Your browser is out-of-date!