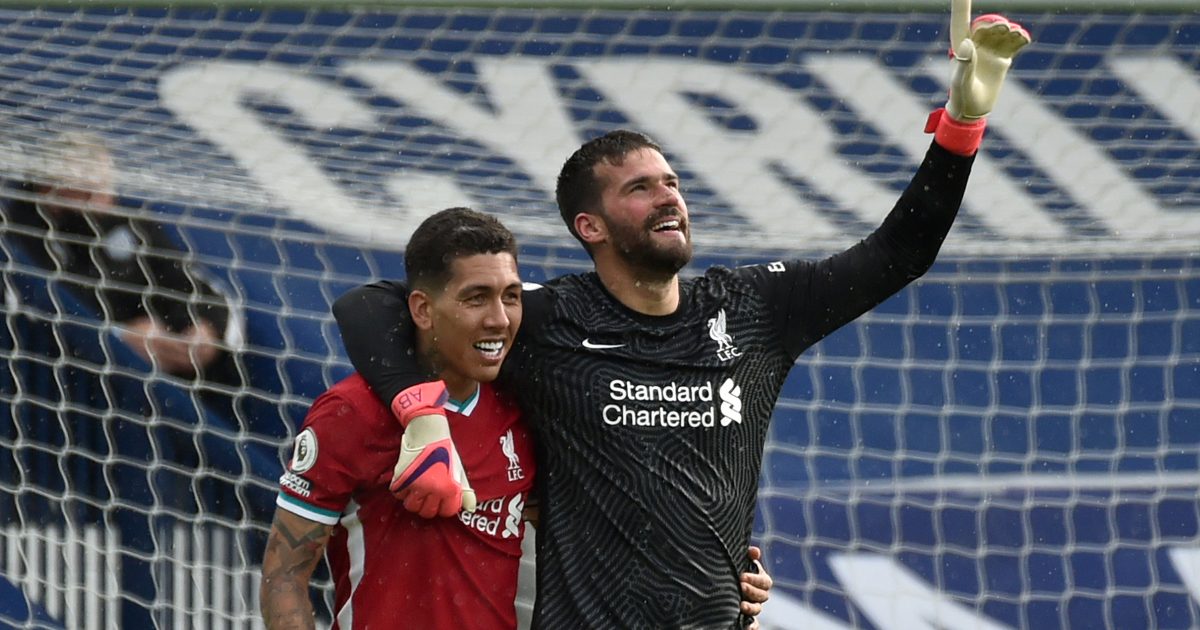 Alisson came up for a corner in the last seconds of the game and he headed in a vital winner for Liverpool against West Brom.

Just as the Reds’ top-four chances looked virtually over the Brazil international glanced in Trent Alexander-Arnold’s corner to clinch a 2-1 win.

He was mobbed by his team-mates after his shock goal moved Liverpool to within a point of fourth-placed Chelsea with two Premier League games left.

Roberto Firmino hit the post and Sadio Mane had a goal disallowed for offside as relegated Albion gave as good as they got.

Kyle Bartley saw his goal ruled out as the Baggies nearly caused an upset before Alisson’s late heroics.

West Brom initially matched their visitors and took the lead in the 15th minute after unpicking Liverpool too easily.

The Reds failed to break and Semi Ajayi’s clearance fell to Matheus Pereira who slipped in Robson-Kanu to find the bottom corner for his first top-flight goal since November 2017.

Liverpool’s soft centre had been exposed again but Mane should have levelled eight minutes later rather than shoot wide from 12 yards after Thiago and Fabinho found a way through.

Alexander-Arnold’s free-kick deflected over before the right-back fired over but Liverpool did not have to wait much longer for a leveller.

They caught Albion out in the 33rd minute with a quick free-kick after referee Mike Dean ordered a restart having obstructed Fabinho.

Mane raced away to find Firmino only for Grady Diangana’s tackle to see the ball roll free. Mane then nipped in ahead of the dawdling Bartley to poke to Salah who curled into the bottom corner from 18 yards.

It was the striker’s 22nd goal of the season and drew him level with Harry Kane in the race for the Golden Boot.

Jurgen Klopp’s men continued to press after the break and Mane’s celebrations were cut short by an offside flag after he converted Alexander-Arnold’s cross from close range.

Sam Johnstone saved from Salah after a quick Liverpool break and Firmino shot wide as the impressively resolute Baggies continued to frustrate.

The visitors were on top but needed an offside flag to stop Albion retaking the lead when Bartley headed in Conor Gallagher’s corner with 20 minutes left, with Matt Phillips adjudged to have been offside and interfering.

The near miss gave them encouragement and Alisson had to smother Robson-Kanu’s effort with 12 minutes left.

Liverpool, though, camped in the hosts’ half with time running out and Thiago curled wide with Alexander-Arnold shooting wastefully over after cutting in from the right.

Albion’s stubborn and impressive resistance looked like holding firm with Johnstone turning Thiago’s drive behind three minutes from the end.

But Alisson had the sensational final word when he arrived to meet Alexander-Arnold’s corner and nod in past Johnstone in stoppage time.