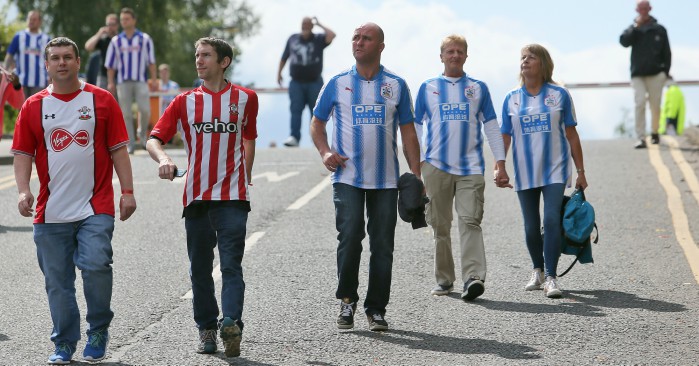 For the moment, we have the widest relegation field in the top flight of English football since 1977. With 11 games to go, Bournemouth, in 10th place, are only five points above the relegation zone. Forty-one years ago there was a similar spread, although differences in the games played column make the calculation for that year approximate.

A look at the numbers shows that wide relegation fields at this stage in the season are becoming more common. Two reasons suggest themselves. First, it’s harder than ever to take points off the top clubs, so the classic mid-table club is a semi-endangered species. Second, TV money tends to shrink the financial gaps in the bottom half of the table. What we like to blast as widespread mediocrity is a levelling partly caused by the distribution of funds.

It’s almost impossible to handicap such a huge field, which is of course why we’re going to try to do it. The clubs fall into four main categories:

Likely to go down: West Bromwich Albion
The Pardew appointment was always a bit of a reach. Sam Allardyce and Tony Pulis have clear systems designed to avoid relegation, but Chunky has only seat-of-the-pants morale boosting. When that doesn’t work, there’s little he can offer in a survival battle. Walking into a squad built for Pulisball, he’s been helpless to forge any other kind of attack. Albion have actually scored fewer goals per match since Pardew arrived, and the only win – 2-0 home to Brighton – was achieved with two set-piece headers. The schedule to come is actually quite favourable – only three of the top six, and six home matches – but there’s no indication the team is up for the challenge. When your manager refers to “11 cup finals”, as Pardew did recently, you know he’s out of ideas. Then again, that’s what makes Great Escapes great, and at least two xG sources say Albion are playing better than their results.

Likely to stay up: Bournemouth, Watford, West Ham United
It’s not just the point totals that give you confidence here. For all three clubs there are good reasons to think survival.

For Bournemouth, it’s Eddie Howe. The man is a steady performer, and his teams seem to follow a clear pattern: slow start, but a second-half run to the clear before the final few weeks. I admit I had my doubts this time around, but this is very much the same Cherries side of the last two years. In fact, with 31 points, they’re ahead of pace – two years ago at this point they had 29, and last year 27. They’re also playing the same never-say-die way; you couldn’t get more Bournemouth than their recent comeback wins against Arsenal and Stoke City. Two years ago 42 points, last year 46, this year something similar.

Watford don’t have a known quantity at the helm – they never do – but they have the Pozzos in the boardrooms, and those guys are pretty shrewd. Javi Gracia has a reputation as a giant-killer, and when he joined, the schedule showed five matches left against the top six. Chelsea are down, the other four to come, and crucially the one missing from the schedule is Manchester City. Unfortunately, all four are away matches. But that makes the home schedule generous: six matches, including West Brom, a struggling Burnley, Crystal Palace possibly without Wilfried Zaha and Newcastle. Still, maybe an asterisk here. Unlike Bournemouth and West Ham, Watford haven’t hit a clear run of form with their manager, so we still don’t have a read on the side.

And so to West Ham, who don’t need an ace in the hole, since they’ve got a couple showing by the names of Arnautovic and Chicharito. The side has just been playing very well. I’ve been holding my breath, waiting for the Moyes-aster, but it doesn’t look like it’s going to happen. They’ve only lost one league match since Christmas, and they responded to a pasting by Brighton with a win over Watford. Davy is guiding the side through the injury crisis, and overall has made a number of fruitful tactical moves. The big problem is the schedule, which includes five of the top six plus Everton and Leicester City.

The promoted clubs: Huddersfield Town, Brighton & Hove Albion, Newcastle United
The three promoted clubs are within a point of each other. What’s more, Brighton and Newcastle have very similar profiles: low-scoring teams that get by through defence and deliberate play. Huddersfield are different: although they too have scoring troubles, they prefer the press, and when it doesn’t work they’re much more susceptible at the back. Whereas the Seagulls and Magpies are tied for seventh in fewest goals conceded, the Terriers are tied for 18th.

For all three sides, a lot will depend on finding a decent source of goals. Here Brighton and Huddersfield have the better hopes: Jürgen Locadia is ready to make his first league start, and Steve Mounié has come out of his slumber. Newcastle will have to make do with Joselu and Dwight Gayle, and there’s no way to know if Islam Slimani will produce. The Magpies had a rousing win over Manchester United, but remember Huddersfield did the same earlier in the season, and Brighton outplayed United despite losing at Old Trafford. There’s very little separating the sides.

Let’s look at the schedules, then. Brighton have six home matches to the others’ five, but three of those matches are against the top six. Newcastle have a slight advantage in spots: they don’t have to play Manchester City, and they get West Brom at home. Huddersfield are under more pressure right now, because their run-in is brutal, with Chelsea (A), Everton (H), Manchester City (A), Arsenal (H) – but Arsenal are likely to have nothing to play for in round 38. Here too there’s little to go on.

The last time all three promoted clubs stayed up was six years ago. Goal difference suggests Huddersfield are the most likely for the drop, but they can afford to lose big to the top teams if they can get a few wins against the rest. Basically, it’s wide open.

Established clubs in jeopardy: Crystal Palace, Swansea City, Southampton, Stoke City
Before Wilfried Zaha went down, Palace would have been in the ‘Likely to Survive’ group. Now it’s touch and go. No other team depends as much on a single player. Word is he’ll be back in three or four weeks, but you never know. The last time Palace won without Zaha in the lineup? September of 2016 – against Sunderland. Since then, they’ve lost all seven games he’s missed, with a GF/GA of 1-17. Schedule-wise, the most difficult matches come while he’s out, so if he gets back in a reasonable time, he’ll be there for the most winnable games. Good news on the injury front is the impending return of Mamadou Sakho, crucial to a wobbly defence. Roy Hodgson has coaxed some remarkable performances out of the side, and there’s no reason it can’t continue. I’d rate Palace as the most likely to survive of the teams in this category.

Everything’s jack for Swansea City at the moment. They believe in themselves, and performances continue to improve. The key stat: in their last two home matches they’ve taken 12 and 13 shots respectively, not outstanding but much better than most of the season. The schedule looks favorable: only five home matches, but only three matches in total against the top six. Tactically, the big question is how January signing André Ayew will fit in. If he can work effectively with brother Jordan, the Swans should survive, and bravo to Carlos Carvalhal and staff. And maybe even to the ownership, who despite their considerable failings will have pulled one out of the fire again.

Southampton have been sleepwalking all season, and they’re a step or two away from the open manhole. Mauricio Pellegrino doesn’t seem the type for a tactical or psychological shakeup, and Guido Carrillo hasn’t made much difference up front. Mario Lemina and James Ward-Prowse are playing pretty well, but neither is going to drag you to survival. At least keeper Alex McCarthy is in form. The Saints face only three of the big six, but they also have only four home matches remaining, including Chelsea and Man City (the latter on the final day). Given the poisonous atmosphere at St. Mary’s, though, that might be a plus. Still, the side have only one league win in their last 14, at West Brom. The bookies are on their side – on average they’re the longest odds of any club not in the ‘Likely To Survive’ group – but from this angle it’s hard to be optimistic.

It’s a little easier to be positive for Stoke City. Against the odds, Paul Lambert has looked inspiring, and unlike Pellegrino might be able to shake things up effectively. Badou Ndiaye is a good addition to midfield. But the striker problem refuses to go away. Unless you want to go for broke and play 18-year-old Tyrese Campbell, I’d say damn the torpedoes and install Peter Crouch as lone striker for the rest of the season. He can handle the pressure and he gives you a distinctive weapon. You don’t need elegance, you need goals. The schedule is tough: only five home games, and only four of the 11 against relegation candidates. It’s not encouraging, but the side has enough talent (in midfield, anyway) to pull it off.