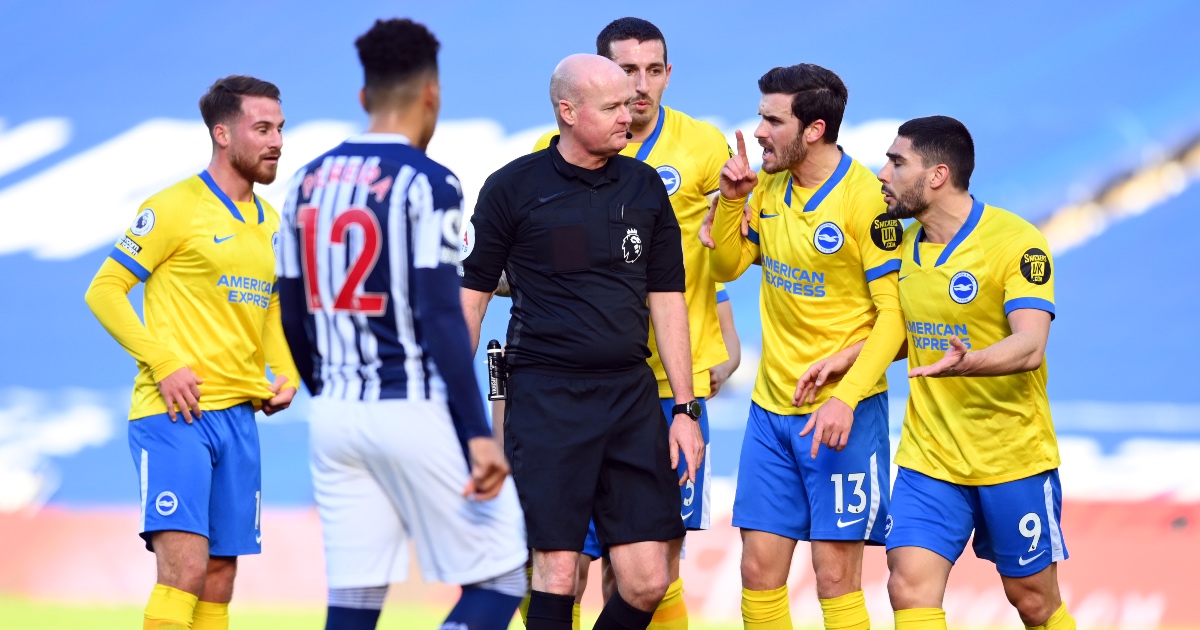 Kyle Bartley’s early header clinched a 1-0 victory for the hosts and the Seagulls missed two penalties – only for the officials to steal the headlines.

Referee Mason lost control of the game in the first half after Lewis Dunk’s quick free-kick looked to have hauled the visitors level.

Mason initially disallowed it, before giving the goal and eventually ruling it out after a VAR check during chaos and confusion.

Wolves boss Nuno Espirito Santo was fined £25,000 after labelling Mason not good enough to officiate in the top-flight following a at Burnley in December and the referee was embroiled in further controversy on Saturday.

Away from the debate, Albion claimed just their second win under Sam Allardyce and are now eight points from Premier League safety.

They needed Pascal Gross and Danny Welbeck to miss from the spot as the Seagulls slipped to a second straight defeat to remain four points above the relegation zone.

Baggies boss Allardyce targeted six points from three home games in a week – starting with the Seagulls – ahead of the visits of Everton and Newcastle.

He was given the perfect start when Bartley grabbed an 11th-minute winner.

The Baggies were bright and Okay Yokuslu’s shot deflected wide for Conor Gallagher to swing in a corner and Bartley nodded in from six yards.

It needed a VAR check but play was eventually pulled back after Mason went to his monitor and gave the Seagulls a penalty following Yokuslu’s handball in the box.

But Gross smacked his spot kick off the bar and Brighton’s anger only grew during a baffling five minutes after half an hour.

Alexis Mac Allister won a free-kick which Dunk quickly curled in after Mason had blown his whistle – only for the referee to instantly blow again while the ball was travelling towards goal because Albion goalkeeper Sam Johnstone was not ready.

Brighton furiously surrounded the official who eventually awarded the goal – to Albion’s outrage.

VAR official Simon Hooper then intervened to check if the ball had crossed the line before Mason’s second whistle and pulled the game back for Dunk to retake the free-kick and fire straight at Johnstone.

It was a shambolic spell as Mason panicked but it at least gave the game an extra edge and the teams traded chances soon after.

Johnstone’s smart stop thwarted Maupay and Brighton should have levelled six minutes into the second half when Connolly blazed a glorious chance over from close range.

Joel Veltman headed over as Brighton piled the pressure on and they missed a second penalty with 15 minutes left.

Conor Townsend brought down Gross and this time Welbeck’s low spot kick came back off the post for the Baggies to take the points.