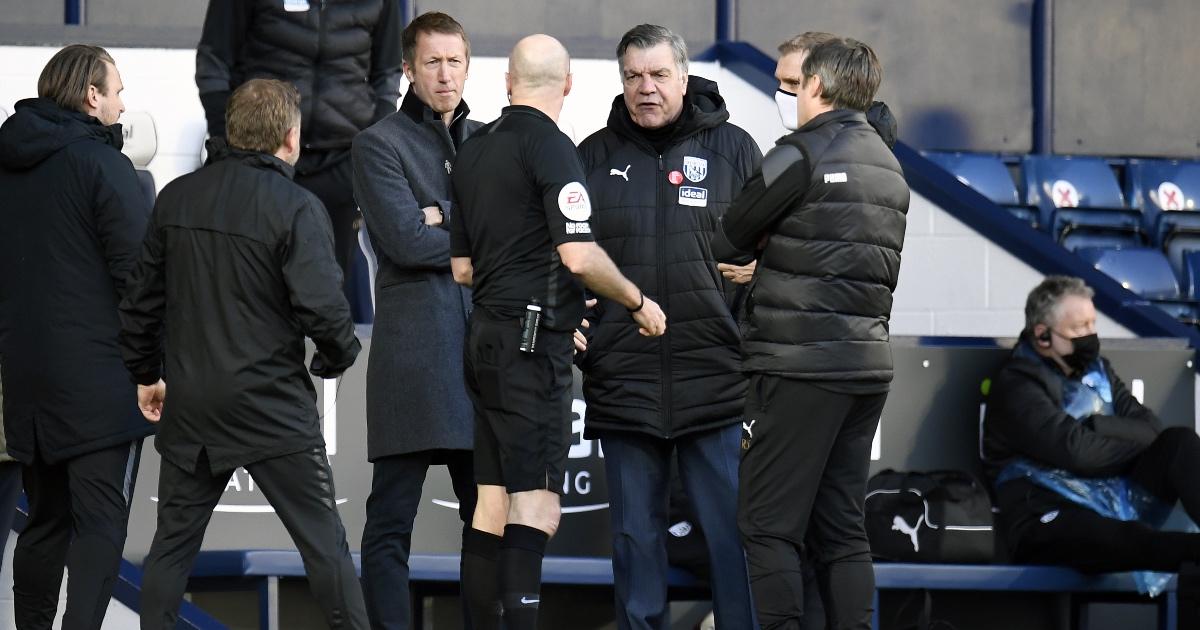 Sam Allardyce was amused by West Brom’s 1-0 win over Brighton, calling it a ‘bizarre’ game.

The Baggies went ahead in the 11th minute as Conor Gallagher found Kyle Bartley in the box.

FEATURE: How Tuchel should spend £261.37m to win Chelsea the title

Brighton then missed penalties either side of half-time.

West Brom also got lucky in the second half. Referee Lee Mason, with the help of VAR, ruled out a Brighton equaliser.

Lewis Dunk scored with a quickly taken free-kick but Mason had blown the whistle a second time.

Speaking after the match, Allardyce told BBC Sport: “I am just laughing about how bizarre this game was. Obviously the most important thing for us was a clean sheet and a corner we converted very well. Lots of chances after that for both teams, we managed to get the one and they managed to not score any of theirs.

“Not as good a performance as I expected but the most important result, sometimes only the result matters. In our position that is all that matters today.

“Two penalties, I can’t say the first one is, it is bizarre the rules if that’s a penalty. VAR and the referee say that is a penalty, [it’s] ludicrous if that’s the way the game is going. I don’t have any complaints about the second one. But we were fortunate today because Brighton missed both of them.”

When asked about Dunk’s controversially disallowed goal, Allardyce continued: “The referee blew the whistle twice so that was why it was disallowed, Lee Mason came over and explained the situation regarding that – the only way we can avoid it is put someone on the ball and don’t move back until the referee moves you back. I thought everybody had to get set.”