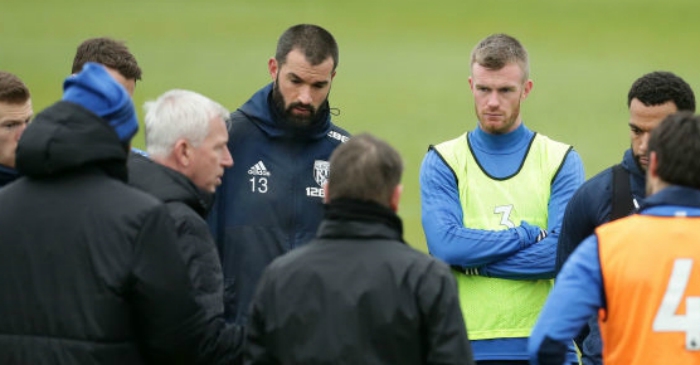 Chris Brunt ‘laid into’ his West Brom teammates before ‘questioning’ Alan Pardew’s tactics on Saturday, according to reports.

West Brom slipped to a 2-1 defeat to Huddersfield at the weekend, leaving them six points adrift at the bottom of the Premier League table.

The Baggies are seven points from safety with ten games remaining, and have earned just eight points in 14 games since Alan Pardew was appointed manager on November 29.

According to the Express and Star, their latest defeat attracted the ire of long-serving Chris Brunt.

The Northern Irishman came on as a substitute in the second half, and was ‘visibly annoyed when in possession at times’.

His angry was not isolated to the pitch however, as Matt Wilson writes that the 33-year-old ‘stormed into the dressing room after staying out on the pitch to clap the home fans’.

He then made his feelings clear to his teammates, ‘before rounding on Pardew and questioning his tactics’.

Brunt is thought to have ‘disagreed’ with Pardew’s choice to use a 4-4-2 formation against Huddersfield’s five-man midfield.

Brunt assisted Craig Dawson’s consolation seven minutes after coming on, and ‘was one of few in blue and white who came away from this dreadful game with his reputation intact.’